‘Dynasty’ Goes Out in a Blaze of Glory — Bring on Season 2! 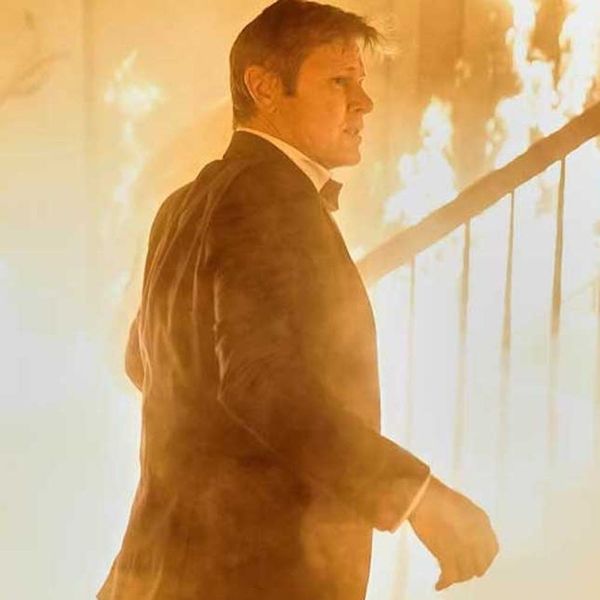 Well done, Dynasty. All the kudos for the season 1 finale and praise be to The CW for renewing you, because that episode, “Dead Scratch,” was absolutely incredible from start to finish.

Where to even begin? Well, it’s Steven and Sam’s wedding day, but that’s just the convenient setting bringing everyone together, because the wedding is of almost no importance. It goes off without a hitch, and Sam and Steven get to be happy together — for about five minutes.

Around them, all hell is breaking loose. First, the Colbys storm in, demanding their share of Thomas Carrington’s company. Fallon’s reaction to this is surprisingly mellow, considering she was romantically involved with Jeff, but she’s a lot less happy about it when the Colbys convince Faux Adam (“Fadam”) to side with them and sell Carrington Atlantic to a Russian oligarch.

Fallon: “If you like horror movies, I’ve got a great one for you in which the Colbys are actually Carringtons; somewhere around the second act, I bang my cousin; and by the end, we lose the family company.”

Of course, while all of this is happening, the board votes Blake out as CEO and installs Fallon in his place, so Alexis’ plan ends up hurting her daughter, not her ex-husband. She tries to torpedo the deal, but what happens instead is that Liam shows up with his boatloads of money (he’s from a super wealthy family, remember) and says his uncle can buy Carrington Atlantic for more than the Russian is offering.

Fallon changes her vote (and Steven’s) and says she’s going to start her own dynasty. It’s a great moment and would have been a decent cliffhanger if it weren’t for the fact that Kirby Anders is in town for the wedding — Sam invited her to surprise Anders, not knowing that Kirby is actually kind of crazy and used to torment the Carringtons when she was a child.

Speaking of crazy, guess who else is there? Claudia! It turns out Matthew isn’t alive after all; he’s merely a figment of her imagination. Twist!

So there are two women running around the wedding who have nefarious designs on the Carringtons. Claudia confronts Cristal and ends up shooting her, while Kirby sets fire to the lodge after locking the family inside. I mean, it might not have been Kirby? It could have been someone else, like Mrs. Daniels, who shows up at the wedding to tell Steven that she’s pregnant with his baby. But my money is still on Kirby.

Either way, the family is toast until Michael saves the day, but when the episode ends, Steven is nowhere to be found; Alexis has run upstairs in the lodge instead of down, finding Cristal, who has been shot; and Michael has just run up after Alexis to try to help. None of them has gotten out safely yet (that we know of).

What a great twist if Alexis saves Cristal — would Cristal then feel obligated to keep her mouth shut about seeing Alexis kiss her supposed long-lost son, Fadam? Please let that be what happens, especially after that top-notch, knock-down, drag-out fight Alexis and Cristal have when Cristal confronts her. That fight was epic and nothing is better on a soap than having enemies grudgingly call a truce over something like a life-or-death situation.

I don’t really think any of these major players are going to be killed in the fire, but it does leave four people’s fate up in the air for season 2. Plus, Kirby is back in town, Fallon has two men who love her, and Claudia is on the run with Fadam. Is it September yet?