The Real-Life Up House Is Taking Flight 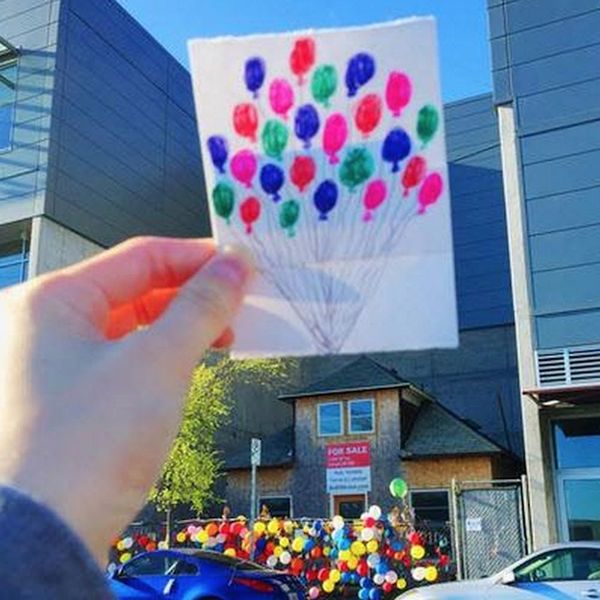 Here’s some proof that happy endings don’t just happen in the movies. The Edith Macefield House, rumored to be the inspiration for the Pixar movie Up, is moving from its humble Seattle roots to a new unknown location. And although the home won’t be flying off into the clouds, it is no less amazing a feat considering Edith’s long fight to keep it.

A little history: The Edith Macefield House, located in the hip Seattle neighborhood of Ballard, has been around since the early 1900s. Not only did Edith grow up in the home, but her mother lived there as well. After decades of city developers trying to buy her out (In 2006, Macefield even turned down a $1 million offer), they decided to build around her.

After Edith’s passing in 2008, the home was left to the person you might least expect: Barry Martin, the construction superintendent of the concrete shopping center that would come to surround and tower over her tiny little house. Martin had become a sort of caretaker to Edith during the end of her life, buying groceries and even helping her with her bills and little things around the house. He eventually sold the property to an owner with high hopes, but its fate has been in limbo for the past seven years.

That is, until now.

Due to financial and city zoning issues, the seller has decided the best option to keep the Edith Macefield legacy alive is to donate the home to a nonprofit and then sell the land. The nonprofit has been chosen and will be announced at a press conference on Tuesday, August 4.

This house, like most other nail houses around the world, has become a symbol of the struggle between “Old Ballard” and the gentrification and tech-ification of the neighborhood (with companies like Amazon building a Google-like campus nearby). Seattle residents, mainly the Ballard community, were so inspired by Edith’s fighting spirit that they have honored her with a music festival, cocktail and even tiny house tattoos.

What do you think about the Edith Macefield House? Do you know of any nail houses in your community? Let us know in the comments below!

Katie Bond
Katie is the Home + Parties Editor at Brit + Co. She works with writers to develop the most colorful, creative and Pinnable home content on the web. When she's not working away on her laptop, you can find her hanging out in surferburbia (aka The Outer Sunset), lounging in Golden Gate Park or learning to surf on her brand new longboard.
Home