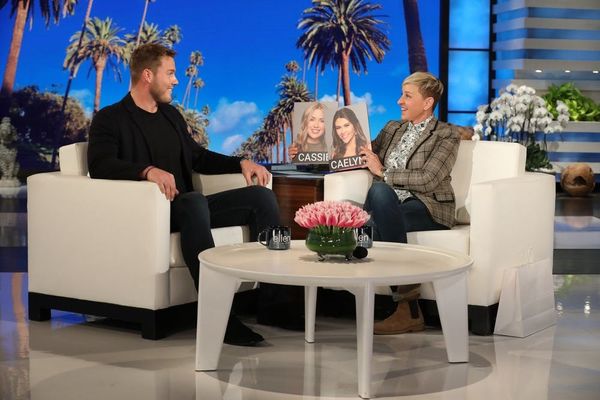 Colton Underwood is still refusing to divulge whether his season of The Bachelor ends in an engagement, but that hasn’t stopped people from offering up their predictions. Ellen DeGeneres has a particularly unconventional guess, which she shared when Underwood visited her show on Friday, February 1.

“I don’t know how you’re going to narrow it down,” DeGeneres told the former football player. “I think the final two are going to be Cassie and Caelynn. That’s my prediction, that you’re going to have these two.” Underwood, for his part, remained quiet and kept a neutral face, applauding along with the audience.

DeGeneres then made a different prediction. “Or maybe both!” she joked. “Maybe it’s the most dramatic rose ceremony ever and you get both of them. You’d go from being a virgin to having two wives.” Underwood simply laughed, saying, “Crazier things have happened!”

While filming has already wrapped on Underwood’s season, the season 23 leading man remains committed to keeping the finale a secret so that viewers can “go on this ride and this journey with me.” He reiterated to DeGeneres that he’s the happiest he’s ever been.

DeGeneres admitted that, early on, she (like Jimmy Kimmel) was set on Cassie being the winner. But as time went on, she started to become more partial to Caelynn. “When I got to know [Caelynn] a little more this last week, I think she’s fantastic too,” she said.

During the Monday, January 28, episode, Caelynn revealed to Underwood that she was raped in college four years ago. She also took to social media after the show to further discuss her experience. “She’s walking around happy as can be, and you don’t know this terrible thing that happened to her in her past,” DeGeneres said. “We should never judge anybody. We really don’t know what’s going on.”

Who do you think will win Colton’s season of The Bachelor? Let us know @BritandCo!