Everybody Loves Somebody Reinvents the Rom-Com With a Spanglish Twist 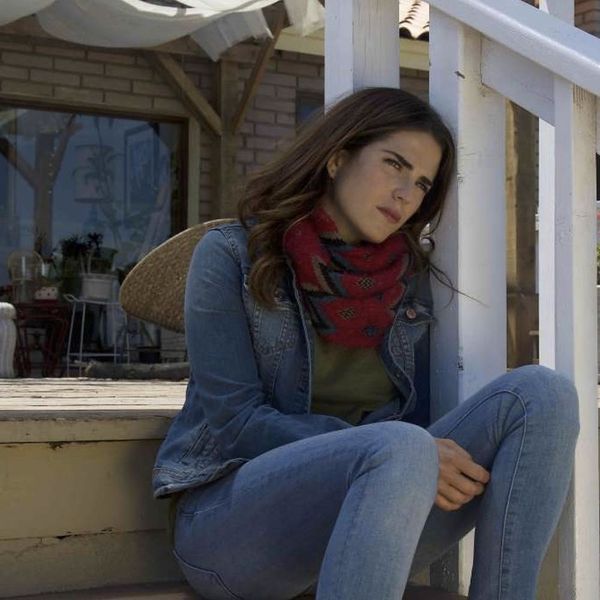 Many of us have an idea of what love is, or at least what we’d like it to be. But the reality often does not measure up to our daydreams and nostalgic musings. In her gorgeously shot Spanglish indie film, Everybody Loves Somebody, Mexican filmmaker Catalina Aguilar Mastretta gives viewers a new kind of romantic comedy, one about love, family and the courage to try again. Starring How To Get Away With Murder’s Karla Souza, José María Yazpik and Ben O’Toole, Everybody Loves Somebody follows Clara an OBGYN living in Los Angeles who soon discovers you can’t quite outrun love. We recently had a chance to chat with Mastretta and the cast about the film, which puts Mexican stories at the forefront of a tale of finding love in the 21st century.

Brit + Co: Catalina, Everybody Loves Somebody is such an inspiring multicultural story for millennial women in particular. What inspired you to write this story in the first place?

Catalina Aguilar Mastretta: Thank you so much! I think I wanted to write a story about that emblematic ex-boyfriend we all have; or first love. Of course, when you start writing about that, you have to write about how people grow up and how that informs who you fall in love with. So in the end, it was almost like a coming of age story for this woman who thinks love is one thing and sort of discovers that it might be all kinds of different things.

B+C: Karla and José what drew you to this project? There aren’t many Spanglish indie films out there so this is really special.

Karla Souza: It was definitely exactly what you said. There are very few romantic comedies that are treated in a dramatic way. I had decided not do any more romantic comedies, and then I read this script, and I’ve seen [Catalina’s] first movie. I really wanted to work with a female director, which believe it or not, are very few in Mexico, and I hadn’t worked with one. I thought, “What a great way to do a romantic comedy and have a female lens.” In other films that I’ve done, you always have that sexy body shot that the male director wants. It was really funny for me in this movie. Catalina was like, “No. It’s okay. I just need a close up here.” I was like, “Really? I’m in a bra and underwear. You don’t need the whole body?” She’s like, “No.” It was such a weird thing for me to realize. It’s such a different take on how to tell a story and the perspective of it.

Also, the story actually kind of hit a few nerves for me because it felt very close to my heart. Within that, it’s bittersweet comedy about family. As a producer, it really interested me to jump on a, as you said, a bi-cultural, bilingual movie because normally you have a very American take on what it feels like to be Mexican living in the US. There was a very fluid movement in and out of Spanish where it wasn’t very forced. Those are the very important things that sort of led me to decide to do it.

José María Yazpik: For me, it was working with Catalina. I’ve seen her past films, and I really liked them. I think that she directs actors really well. And also it was the fact that I’d never done a romantic comedy before.

B+C: Really?! Not one in the course of your entire career?

JMY: In Mexico, there have been a lot of romantic comedies lately, but they are very simple. They go for the easy joke. Do you understand what I mean?

JMY: Yes, when I read the script, I thought well, if I’m going to do a romantic comedy then this is it. It has a good cast, and with a great script and a great director, so I jumped in the boat.

B+C: Ben, as an Australian actor, what drew you to this particular script and to Catalina’s words?

Ben O’Toole: I guess primarily it would kind of be the idea of having a female protagonist. It’s about a woman who’s leading what is typically I guess referred to as kind of a masculine sort of life, like a bachelor. But it’s told in a way that there’s no judgment on that, you know what I mean? It was really nice to see that told from the female’s point of view. On top of that was the character of Asher, he’s so trusting. He’s a pediatrician and everything so he’s got this way with kids and he’s just got this big heart. And he kind of really drew me in as well because I hadn’t had an opportunity to play somebody that’s so capable of love/

B+C: Karla, let’s talk about your character. Clara is such a different type of character for a romantic comedy and very different from Laurel who you play on How to Get Away with Murder. However, both of these really strong female characters walk to the beat of their own drum. How important was that for you as a woman of color in this country at this time to play a very well-rounded multi-dimensional character?

KS: I come from a culture that is very… I don’t know if you know the term Machista; basically, it’s a very sexist basically culture. To have a woman who’s successful and she’s working, and she has her own job, and she’s providing for herself like you said, she’s making her own decisions and also kind of facing the consequences of those decisions. I do find there’s a lack of women of color, stories written for women of color. This film is not about where Clara’s from. It’s not about the fact that she speaks Spanish and English. That’s just the backdrop. Everything about the character that’s written is about her life. I was really interested in doing that, and I really hope that this movie will open the door and the opportunity for a lot more movies to be made this way.

B+C: What were the nuts and bolts for you when making this film made from the script to the screen? What was the casting process like and how did you find your location?

CAM: First of all I think that this has been a very lucky project. Finding the setting in Ensenada, Mexico was wonderful. I’ve lived in Los Angeles for the past eight years, and I had never crossed the border in a car before. I had such prejudices. So, when I did it, it was just so incredible that this place that is just so beautiful, and has an air about it that was so magical, was so close to Los Angeles and so accessible.

B+C: As a woman of color, I loved the fact that not only was the film so multicultural but that it featured a ton of code switching as well — a major part of the minority and immigrant experience. How intentional was that for you especially considering the climate of the United States today?

CAM: For sure, I think every woman is always in the middle of a type of code switching. We get so many mixed messages about who we are supposed to be. We’re supposed to be wonderful girls who have great style and perfectly matched settings when we have people over. We have to be all of this but at the same time we also have to very independent and stand on our two feet. Those things aren’t necessarily mutually exclusive, but it’s a lot. So I feel like a lot of women today struggle with that.

B+C: Yes, absolutely. What do you want people to take away from this story? Why was this such an important story for you to tell?

CAM: I think writing stories about love, all kinds of love. What I love about this movie it’s about family, technically it’s a love story and a love triangle but at the same time it’s a love story between the two sisters, it’s a love story about the mother and the daughter. Those are the things that I grew up watching and loving. They taught me empathy and how to be in the world and understand the things that I was feeling. That’s what movies are for, and I think that’s why sorties like this are important. So, that’s what I want people to take away from it. I want them to see themselves in the character of Clara or in some other character and feel less alone.