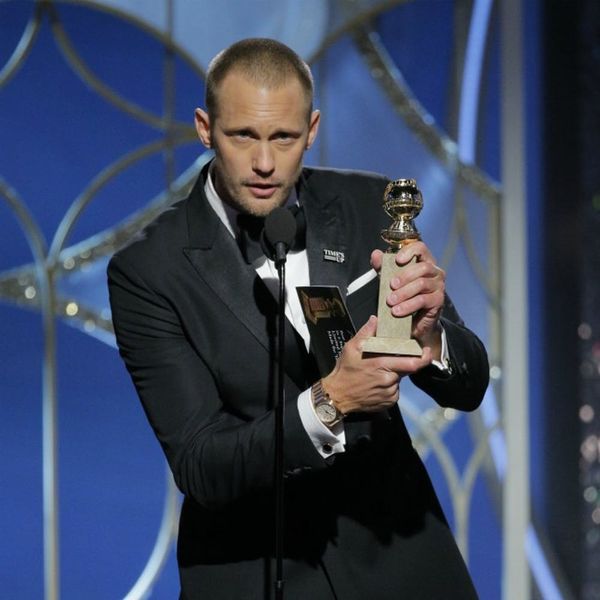 Fans of the HBO show Big Little Lies were excited to see two of the show’s leads, executive producer and star Nicole Kidman and her on-screen husband, Alexander Skarsgård, take home Golden Globes. Kidman nabbed the statuette for Best Performance by an Actress in a Limited Series or Motion Picture Made for Television for her portrayal of the character Celeste, while Skarsgård won Best Performance by an Actor in a Supporting Role in a Series, Limited Series, or Motion Picture Made for Television, during last night’s telecast.

Skarsgård’s character, Perry, sexually abuses his wife (Kidman’s Celeste), as well the character of Jane (Shailene Woodley). So when Skarsgård decided not to mention gender-based violence in his acceptance speech, at a Golden Globes night dedicated to confronting gender-based injustice in Hollywood and beyond, many were left upset with the actor — and he wasn’t the only actor fans are calling out for the missed opportunity.

Skarsgård’s win for his portrayal of Perry on BLL was a perfect opportunity for the Time’s Up pin-wearing actor to speak candidly about gender-based violence. Instead, he called his costars “girls” and thanked his friends for their support. BLL fans weren’t having it.

Alexander Skarsgard just won for playing a domestic abuser. Sam Rockwell won for playing a violent man. Neither of them felt compelled to make a statement against male violence in that moment. #GoldenGlobes #TimesUp

…. and Skarsgard won for his role as a domestic abuser, and refused to talk about it in his acceptance speech. So, yeah. #TimesUp #GoldenGlobes

Alexander Skarsgard’s performance as an abusive, controlling rapist on “Big Little Lies” was indeed deserving of an award. But an awkward character for that room to celebrate… #TIMESUP #goldenglobes

Besides Skårsgard, actor Sam Rockwell took home the Best Performance by an Actor in a Supporting Role in Any Motion Picture for his role in Three Billboards Outside of Ebbing, Wyoming. Rockwell, too, was conspicuously silent on the subject of gender inequality, despite the opportunity he had to make a statement in his acceptance speech.

His character in the movie is a deeply racist and violent man, and fans have also pointed out his missed opportunity at speaking out against violence during his acceptance speech, especially since the character he portrays has faced a lot of criticism.

Sam Rockwell just won an award playing a policeman who tortured a black person. So yeah, time's kinda up. But also kinda not.#GoldenGlobes

I think Sam Rockwell is a fine actor, but if the HFPA thinks #ThreeBillboardsOutsideEbbingMissouri says anything significant about race, it's a barometer of just how much progress we have yet to make in that arena of American life.

While it seems as if Hollywood is taking the lead on gender-based violence in the wake of Harvey Weinstein’s downfall, moments like this show that the community of creatives also has a ways to go in how they are perceived outside of La La Land. But of course, with such public scrutiny, maybe it’s better to say nothing at all than to say the wrong thing entirely.

What do you think of Alexander Skarsgård’s Globes speech? Tell us @BritandCo!

Kat Armstrong
Kat has been a writer, social media maven and mom for longer than she's willing to admit. She's also spent time in front of and behind the camera, interviewing celebs, politicians and acting as a producer for fashion and artistic photography shoots. When she isn't writing for various orgs and publications, she's hanging with her kids, husband and French Bulldog, Peter, in Toronto, Canada.
Controversy
Current Events
Controversy Golden Globes