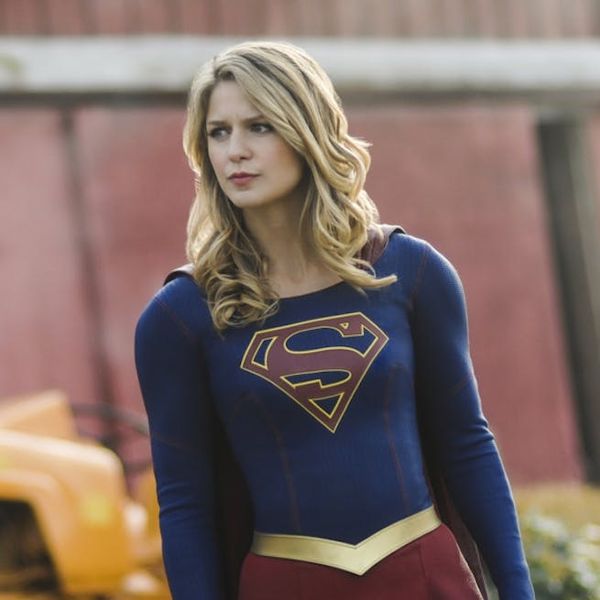 There's no shortage of superhero stories these days, thanks to the Marvel Cinematic Universe movies, DC films, and comic book-inspired TV shows. While some have superhuman strength or otherworldly powers, they all fight to protect the public and stop villains from carrying out their evil plans. Scroll down to see some of our favorite female superheroes, who've collectively saved the world more times than we can count. (Note: Spoilers ahead!)

We can thank Oscar winner Brie Larson for bringing Captain Marvel, AKA Carol Danvers, to life. She's one of the fiercest superheroes around — the one even other heroes call in when they need help, as we saw at the end of Avengers: Infinity War. The character's solo film broke records at the box office and made a huge impact on the movie's star, too. In an interview with EW, Larson said that, as an introvert who also has asthma, portraying Captain Marvel changed her life.

Another kick-butt female superhero from the Marvel Cinematic Universe, Scarlett Johansoon's Black Widow first popped up in Iron Man 2 before joining the team in The Avengers and again in Captain America: The Winter Soldier. You can also watch her trying to save the world in Avengers: Age of Ultron, Captain America: Civil War, Avengers: Infinity War, Captain Marvel, and Avengers: Endgame. And if that's not enough — seriously, this is one busy lady — Black Widow is (finally) premiering on July 9!

Fighting alongside Natasha Romanoff in Black Widow, Florence Pugh's Yelena is definitely on her way to becoming a fan favorite. Having grown up together, Nat and Yelena must put their differences aside in order to defeat a dangerous villain with ties to their past and save the world, naturally.

Elizabeth Olsen's Scarlet Witch, AKA Wanda Maximoff, didn't start out as a superhero, but after some evil-doer's experiments gave her powers, she was quickly caught up in the action. It didn't take long for her to switch sides and fight with and for the Avengers. Her latest adventures on WandaVision, Marvel's first TV show and the beginning of Phase 4, opened up a whole new world of possibilities for the MCU.

Gamora, played by Zoe Saldana, is another character that started as a potential villain, but it turned out in the first Guardians of the Galaxy film that she was just trying to get away from her evil adoptive father, Thanos. Despite all of her efforts, Thanos sacrificed her to obtain the Soul Stone in Avengers: Infinity War so that he could gain even more power. But thanks to Endgame and time travel (yes you read that right), we're pretty sure we'll see Gamora again.

None of the characters in the Marvel Cinematic Universe are without complicated — and often tragic — backstories, and that includes Valkyrie, who first showed up in Thor: Ragnarok. Played by Tessa Thompson, the fearless Asgardian warrior is the last of her kind. And although she captured Thor and handed him over to the Grandmaster (Jeff Goldblum), she quickly found her way to the good side, where she helped Thor save his people from Hela.

While she may not be one of the biggest Marvel superheroes — in terms of both fame and actual size — Hope van Dyne/Wasp is still capable of creating a buzz. Evangeline Lilly took on the MCU role opposite Paul Rudd's Ant-Man in Ant-Man, Ant-Man and the Wasp, and Avengers: Endgame. Their missions tend to be more personal than world-saving, but she gets extra-credit for her time and space-bending scientific breakthroughs.

Wonder Woman, played by former Fast and Furious franchise film star Gal Gadot, is a DC Comics character, but she kicks butt just as hard as the MCU crew. In fact, she (practically singlehandedly) saved the world in both Wonder Woman and Wonder Woman 1984.

The sixth and final season of Supergirl premiered in March of 2021, meaning that Melissa Benoist has been saving the world for five (and a half) seasons on The CW. She's battled countless evil forces, both human and otherwise, while also facing anti-extraterrestrial bigotry.

Danielle Panabaker plays Dr. Caitlin Snow and her complicated alter ego, Killer Frost, who has been both villain and hero during the CW series' run. A meta-human with extraordinary powers, she struggles with who is she (and isn't) while occasionally teaming up with Team Flash to defeat evil.

Played by Willa Holland, Speedy is the younger sister of Oliver Queen, AKA the Green Arrow. Like her brother, she's a vigilante with a knack for archery, and although Holland exited the show in season 6, she did more than her fair share of defending the Arrow-verse against evil when the series was on air.

Ruby Rose and Wallis Day have both suited up to play Batwoman in this Arrow-verse series. As Bruce Wayne's maternal second cousin who's passionate about social justice, Kate Kane defends Gotham in Batman's place.

Krysten Ritter starred as Marvel's Jessica Jones for two seasons on Netflix. A look at the often-dark life of the former superhero who opened her own detective agency — and still has her fair share of impressive abilities — the series showed her ability to survive, thrive, and kick butt.

Chloe Bennet's Daisy (also known as Quake and Skye) went on quite a journey throughout Agents of S.H.I.E.L.D.'s seven seasons. From using her hacking skills to search for her parents to discovering she was inhuman to going on a rescue mission in space, she quickly became one of our favorite heroes.

Do you have a favorite female superhero? Let us know on Twitter @BritandCo!

From Your Site Articles
Related Articles Around the Web
Desiree O
Desirée O is a ‘Professional Bohemian’ who loves anything and everything related to the arts, entertainment, and pop culture. She ADORES being a ‘Newsy’ for Brit + Co, covering all of the latest tidbits of awesomeness that you want to read about. When she’s not writing, she’s either making messy art, going on long adventurous walks with her camera, or poking around over at bohemianizm (http://www.bohemianizm.com/). You can find out about Desirée O and her work at http://DesireeO.com/ or follow her on Twitter @DesireeO.
Movies
Pop Culture
Movies Streaming TV