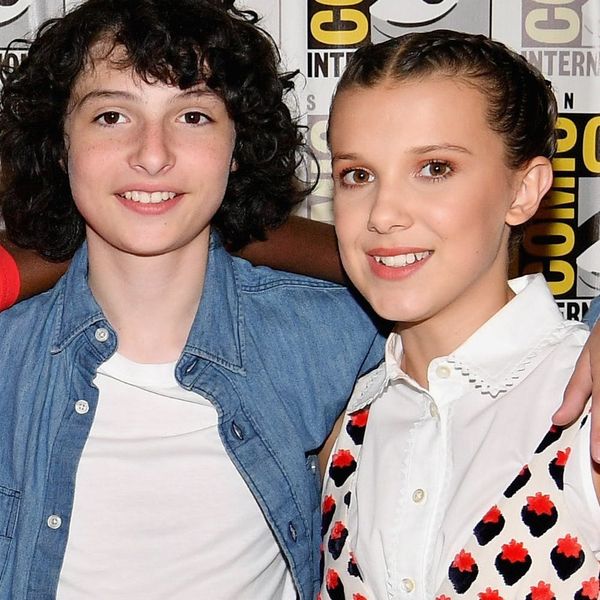 Warning: there are *light spoilers* for Stranger Things season two ahead — read at your own risk!

The cast of kids on Netflix’s Stranger Things aren’t just BFF on the show — they’re BFF in real life, too. With the squad growing up together both on and off camera, their camaraderie is undeniable. Finn Wolfhard (Mike) and Millie Bobby Brown (Eleven), in particular, seem to have an extra-special bond: The two shared a sweet kiss (her first ever!) back in season one of the show, and Wolfhard had the actresses’ back when it came to their second smooch in season two, as well.

As Brown, 13, revealed in an appearance on The Tonight Show with Jimmy Fallon, the young actor, 14, whispered some sweet words of encouragement to her before planting one on her in an adorable moment that was actually caught onscreen.

“Last year, he [Woflhard] was all over the Tic Tacs, cause he was like, eat Tic Tacs, I just want this to be perfect,” she recalled. “So, then this year… he wanted to let me know he was kissing me then, so he was like, ‘I’m comin in!’ And he was like a ventriloquist!”

Brown admits it made for some riveting viewing, calling their kiss both “perfect” and “amazing.” “Every time I listen to that song now, I like, get goosebumps,” she says of Sting’s “Every Breath You Take.” Clearly, the audience was pleased, giving a rousing ‘awwww’ of approval. “No, it’s in disgust! I’m kidding!” she laughed.

Check out the adorable moment above!

Did you catch Finn’s whispered words? Tell us @BritandCo!

Kat Armstrong
Kat has been a writer, social media maven and mom for longer than she's willing to admit. She's also spent time in front of and behind the camera, interviewing celebs, politicians and acting as a producer for fashion and artistic photography shoots. When she isn't writing for various orgs and publications, she's hanging with her kids, husband and French Bulldog, Peter, in Toronto, Canada.
Celebrities
Celebrity News
Celebrities Fall TV Friends TV