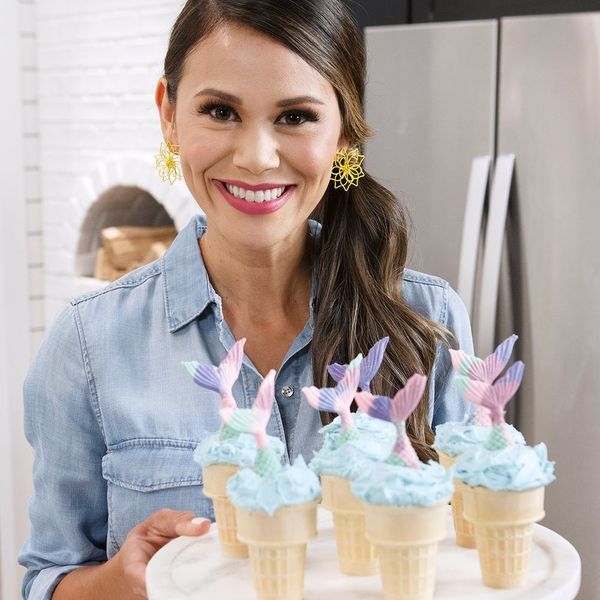 “We focus on trends and viral food mashups [as seen] on social media. All the recipes are ours [and are] inspired by food we love or childhood memories,” Milloy tells Brit + Co. “Jamika and Stuart learned a lot about sprinkles when they hung out with me.” The mouthwatering 14-episode season premieres Sunday, August 12, at 11am, but because we’re too hungry to wait, we had to know Milloy’s top recipes from the season.

Of the 30 brand-new recipes she developed for the show, Milloy gushed about her fig and rosemary Moscow mules. “People equate them with summer and alfresco dining, but you can enjoy them during colder months [by] add[ing] some warmer flavors. The rosemary gives it coziness,” she notes. And though fresh figs begin to disappear during the autumn, simply sub in fig jam to keep those copper mugs filled with the good stuff.

It’s not all just booze and party food; the trio also serves up holiday-focused recipes. Take the turkey roll that Milloy created. It includes all the traditional Thanksgiving dinner fixings like stuffing and cranberry glaze rolled up and baked to perfection. She says, “It’s easier than cooking an entire bird, and you don’t have to fuss over anything.”

But the sweets are really where the show shines. Milloy gave us a sneak peek with the recipe for her pull-apart confetti birthday cake bread. “It brings back so many memories of being a little kid,” she reminisces. “Refrigerated biscuit dough makes it simple, and there’s a secret ingredient in there to give it the nostalgic cake flavor.” And then, it gets topped with cream cheese buttercream frosting and plenty of sprinkles. “My tip for serving is don’t provide paper plates,” she says. “Make everyone pull it apart piece by piece.”

1. For the Pull-Apart Bread: Preheat the oven to 350°F. Grease a 10-inch bundt pan with nonstick cooking spray.

2. Separate the biscuits and cut into quarters.

3. Put the rainbow sprinkles in a large, resealable plastic bag, add the biscuit pieces, and shake until coated.

4. Add the brown sugar, cinnamon and 1/2 cup of the granulated sugar. Seal the bag and shake until everything is mixed.

5. Pour the pieces into the prepared pan and set aside.

6. Heat the butter with the remaining 1/2 cup granulated sugar in a saucepan over medium-low heat, stirring, until the butter is melted and the sugar is dissolved. Mix in the almond extract.

7. Pour the mixture over the biscuit pieces.

8. Bake until the top of the bread is golden, about 30 minutes.

9. Cover with foil and continue to bake until cooked through, an additional 5 to 10 minutes. Let cool.

10. For the Frosting: Mix the confectioners’ sugar, cream cheese, butter, and salt in a medium bowl. Add the vanilla and 2 tablespoons of the milk, and mix until smooth. Add another tablespoon of the milk if the frosting’s too thick.

11. Spread the frosting on top of the cake and garnish with the rainbow sprinkles.

Interview has been condensed and edited for clarity.