From Parkland to Workplaces: Therapy Pets Could Be the Future of Women’s Mental Health Care 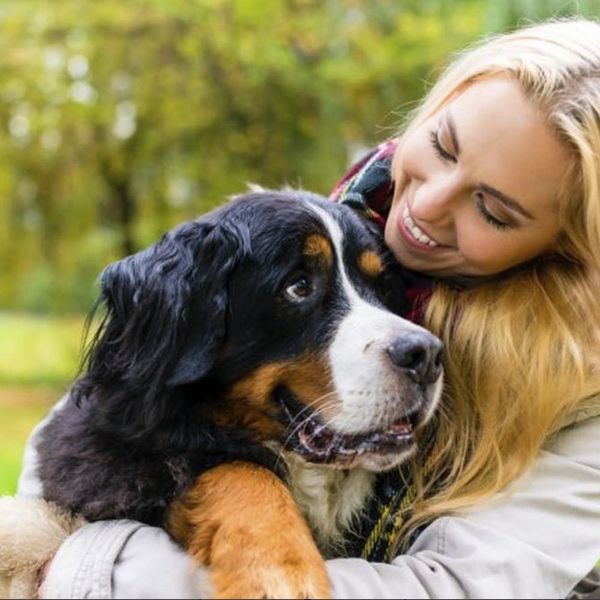 Recently, therapy dogs made national headlines when they were brought to Marjory Stoneman Douglas High School for students’ first day back at school following the horrific shooting on February 14. While most who come into contact with therapy dogs haven’t been exposed to the kinds of terrifying acts of senseless violence that the Parkland teens must now tragically process, the increasing prevalence of therapy pets in a variety of settings suggests they may become a fixture of mental health care.

Therapy dogs are already becoming somewhat common on college campuses during finals when students are extra stressed-out. Across the country, corporate HR departments are following suit. Now, a new study sheds more light on just how helpful therapy dogs can be for students while they deal with exams — and the implications extend to those of us who are long done with school too. Especially, it turns out, for women.

In a study published today in the journal Stress and Health, titled “Petting away pre-exam stress: The effect of therapy dog sessions on student well-being,” researchers with the University of British Columbia found that therapy dogs can have an impact that lasts many hours for stressed-out students. Interestingly, the results of the study also indicated that while men and women felt better after spending quality time with the dogs, women benefited even more than men did.

In a study press release, UBC research assistant and study lead author Emma Ward-Griffin said, “Our findings suggest that therapy dog sessions have a measurable, positive effect on the well-being of university students, particularly on stress reduction and feelings of negativity.”

The study, which consisted of a survey of 246 college students right before, after, and 10 hours after they hung out with 12 therapy dogs (12 whole dogs!) during exam week, found that people who played with the dogs were still feeling better hours later. In fact, up to 10 hours after playing with the pups, some students “still reported slightly less negative emotion, feeling more supported, and feeling less stressed, compared to students who did not take part in the therapy dog session,” study co-author Stanley Coren said in the press release.

But of course, you don’t have to be a student to get the benefits of hanging out with therapy pets, or pets in general. Multiple studies have found that just having a pet can help relieve stress. A July 2012 study published in the Journal of Research in Personality found that pets can not only help relieve stress, but also can help their owners achieve goals. According to a write-up of the study in Scientific American, even just being in a room with a pet or thinking about them can boost self-esteem and make people feel more able to accomplish what they set out to do. And petting a pet was shown to lower blood pressure.

Of course, all of this is information many of us who have pets or spent time with animals can attest to: It feels really good to hang out with animals! But of course, this isn’t going to be true for everyone. Some people have real phobias of dogs, in which case, seeing a group of dogs hanging out on campus might have the very opposite of a calming effect.

Dr. Simon Rego, director of Montefiore Medical Center/Albert Einstein College of Medicine’s Cognitive Behavior Therapy (CBT) Training Program, told the website Vet Street in 2013 that people with a fear of dogs or cats can become fearful even just by hearing the jingle of a pet’s collar. These are seemingly small things that pet-lovers certainly wouldn’t even notice (or would find adorable), but for people who are legitimately afraid of pets, it can be a pretty miserable experience to be around furry friends.

So, bearing in mind that not everyone feels comforted by a group of therapy golden retrievers, for a lot of workers and students, a pet or even just a short therapy session with therapy animals can be super helpful. Everyone deals with stress, and at times when deadlines are piling or exams are imminent, maybe a little cuddle time with a pup is just what the doctor ordered — especially for women.

Elizabeth King
Elizabeth King is a politics, history, and culture writer based in the Twin Cities. She is generally pretty cranky but still enjoys traveling, music from the early 2000's, and plotting the resistance. Feel free to say hi on Twitter at @ekingc or check out some of her work at www.elizabethcking.com.
Mental Health
Womens Health
Mental Health Pets Womens Health
More From Womens Health