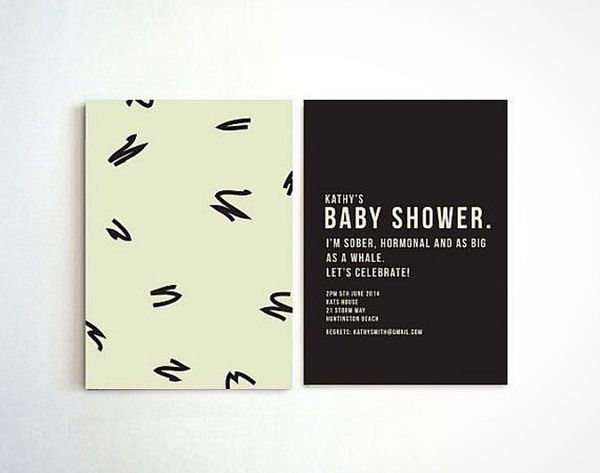 So you’re expecting a little bundle of joy — there’s nothing in the world more special! But just because you’re about to become parents doesn’t mean you have to turn serious. Have a little fun before Junior comes! And when it’s time for the inevitable baby shower, give your friends and family a few chuckles in exchange for all their awesome gifts with these 10 hilarious invitations.

1. What the Duck: Not sure if it’s a boy or a girl yet… or what the heck you’re going to do after the birth?! This is the card for you and your crew. (via TinyPrints)

2. Star Wars: It’s never too early to plant the seed. It may be years before your little one can watch the movies, but one thing’s for sure: they WILL love Star Wars. (via Jenny Guzman Yates)

3. Keep Calm…: We know, we know. This British saying has been done to death, but I bet you’ve never seen this version before. Baby on! (via Tudo de Om Zinho)

5. Make it Rain ($3): This clever invitation is sure to inspire some amazing gifts! (via Zazzle)

6. Game Over: Simple, to-the-point and hilarious. This is a motif that’s super easy to DIY on your own, so you can also save a few bucks on invites. (via Squidoo)

7. Beer + Diaper Party ($13): This one’s for all the daddies out there. When mommy gets presents, daddy gets sweet, golden suds. Sounds like a great party to us! (via Modern Beautiful)

8. Ready to Pop: Get it? Balloons? Pregnancy? Pop? Okay, so it’s not rocket science, but we think this is some clever wordplay. And a fun, interactive invite! (via Invites Baby)

9. The Gender Reveal ($4): Make a game out of your baby shower by using it the time when you reveal your child’s sex to your family. Everyone will be on the edge of their seat! (via Cherry Digital Design)

10. The Sick-Identifier: Last but not least, this idea may be icky, but it’s sure to get you some laughs. (via Squidoo)

Uh oh! Did the stork forget to deliver your favorite invite idea? Share your thoughts in the comments below!

Christina Richards
Community Editor at Brit + Co, Christina owns no less than four Star Wars costumes. When she's not instigating "braiding breaks" around the office, you can find her writing about men's fashion or getting lost on Reddit.
Baby Shower
Home
Baby Shower invitations New Parents