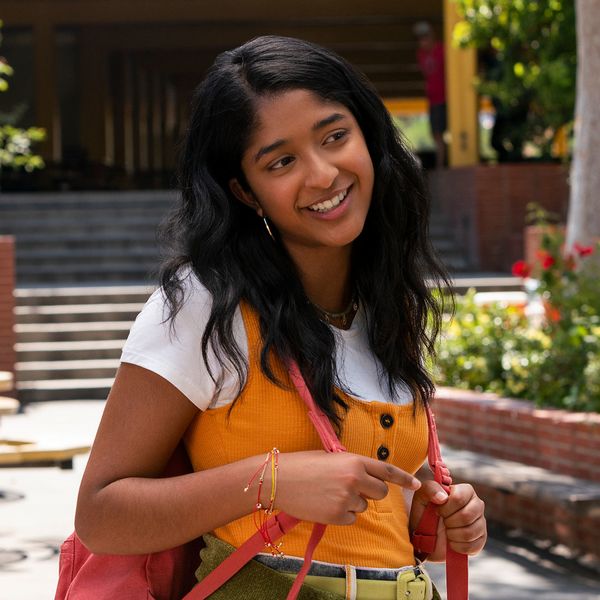 In this week's Teach Me Something New! podcast, Brit Morin and Anjelika Temple chat with actress Maitreyi Ramakrishnan about her totally relatable Netflix series Never Have I Ever, co-created by Mindy Kaling (and her inspired by her own childhood as a first gen Indian American teen). Ramakrishnan talks about the tweet that changed her life, what it means to be Gen Z, and schools us on all the slang. Pull up - here's how to talk Gen Z.

Pull Up: "Pull up means like you're going to a place, but if you want to not be so literal with it, you could have said like, let's pull up to this conversation," says Ramakrishnan. Basically, anytime you want to hang out cue "pull up."

Bet: "Brit, you were like, 'Hey, are you down to do this podcast?' And I would say, yeah, bet for sure, it's like an affirmative," says Ramakrishnan.

Fairy emoji: "It's actually a mean comment," says Ramakrishnan. So you *don't* want a fairy emoji from a Gen Zer, which can be used as sarcasm. "Think of the fairy emoji as like psych, like this is not where you thought this was going."

Tweaking: "Oh, I know this one," adds Brit. "It's like, 'I was having a hard day. I was really anxious." Affirmative!

Yeet: "Yeet means to throw, to just get rid of, to just put it out of orbit," says Ramakrishnan. "Like bro, yeet me my phone, toss me my phone."

What's popping? "That's not slang, but I just always would say that on set to my fellow cast members and slowly that started getting written into the script, which I thought was pretty cool." We're totally stealing!

Tune in for more from Maitreyi Ramakrishnan on the latest Teach Me Something New! podcast!