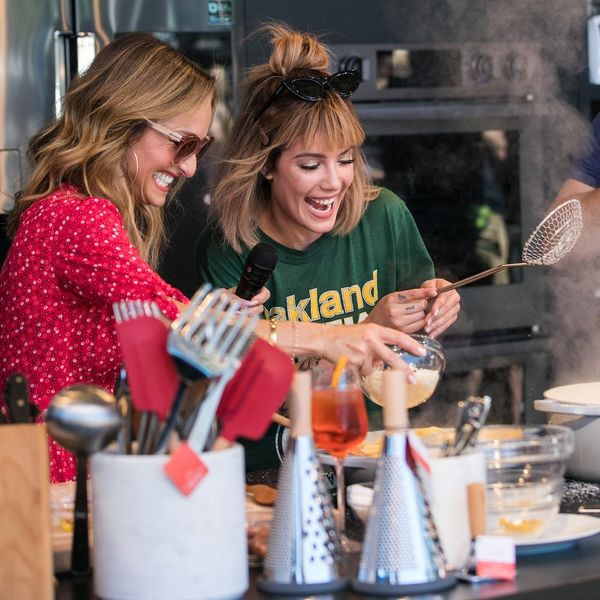 Halsey‘s hit song may claim she’s “Bad at Love,” but when onstage with superstar chef Giada De Laurentiis at BottleRock’s Williams Sonoma Culinary Stage in Napa Valley, De Laurentiis made sure the singer was NOT bad at pasta. De Laurentiis dropped sage Italian advice as expertly as Halsey drops a pop beat…or a F-bomb. (It’s a festival in California, so anything goes.) The two were a hotly anticipated chef + celeb pairing for BottleRock’s high-energy culinary stunts, and we can confirm that the ladies definitely delivered both sass and substance.

De Laurentiis whipped up some Aperol spritzers before getting to work on a spicy rigatoni pasta tutorial for the crowd. She passed on some pasta best practices, including salt the boiling pasta water liberally — like way more than a comfortable amount. Next, always cook your pasta to al dente, which usually takes about seven minutes. As the pasta bubbled away, she gave Halsey a quick onstage tutorial on grating cheese; the key is using GDL’s Williams Sonoma Conical Grader ($20), pictured above, that the Food Network star designed herself.

Once the pasta is cooked (but not quite finished), De Laurentiis said to strain it, reserving the pasta water, then add the rigatoni back into the pot and start stirring in the the cheese. Yes, before the sauce! That way, the parm can really stick to the pasta. Next, stir in the sauce, and allow it to cook slightly, absorbing into the pasta and softening it to that perfect texture. If the sauce becomes too thick, loosen it with a little of the reserved, starchy, and salty pasta water.

Halsey tried to absorb all of De Laurentiis’s guidance as she cracked jokes while stirring the spicy rigatoni. And the heat wasn’t just from all the Calabrian chili paste (one of the Italian chef’s favorite pantry items, which she recommends over red pepper flakes). The Napa wine country sun was blasting the crowd and the celebs during their demo. Luckily, the duos’ mega-watt smiles and witty kitchen banter kept the atmosphere light and lovely as GDL’s famous lemon ricotta cookies.

OMG THOSE LEMON COOKIES. We were lucky enough to try some backstage thanks to the Williams Sonoma Test Kitchen and let us just say, the hype is DESERVED. The lemon glaze is bright and tart, and the ricotta keeps the cookies moist and fluffy. So yummy. Sure you can eat them in several bites, but they are dangerously easy to pop into your mouth as a single flavor bomb. We went back for seconds, and thirds…and well, festivals are just super exhausting, so you really have to take advantage of pick-me-ups. If we’re really being honest, we probably ate… maybe seven each. Don’t judge! You would’ve done the same. If making them homemade isn’t your thang, De Laurentiis has a Lemon Ricotta Cookie Mix ($11) at Williams Sonoma (it also comes in gluten-free too).

The lemon love didn’t stop there; we also got to enjoy De Laurentiis’s flavorful alfredo crudité. Crispy, tiny toast topped with her signature Lemon Alfredo Pasta Sauce ($17) stirred into some ricotta cheese and accented by lemon zest, fresh tendrils of basil, and freshly ground pepper. Again, dangerously easy to maul in one bite and seemingly super-easy to recreate at home for summer festivities.