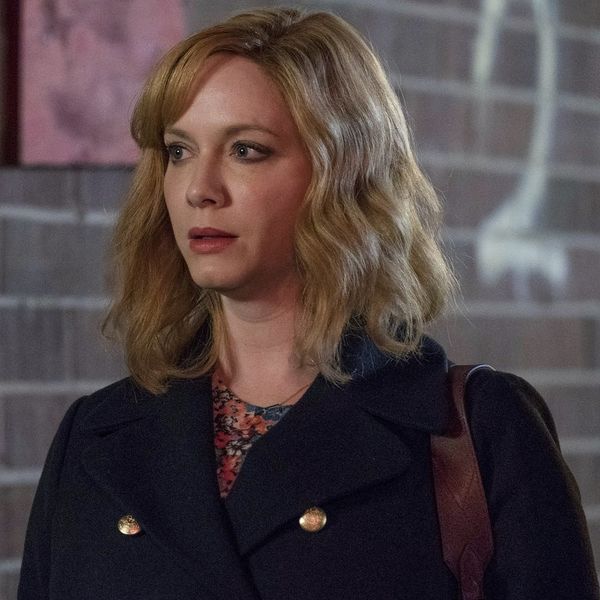 Good Girls has definitely been action-packed in its first season, but it also feels like perhaps the show rushed through a lot of material in just nine episodes. The end of “Summer of the Shark” sees the women decide to go legit and turn Rio (Manny Montana) over to the police. But that can’t be how this ends, right? Hmm. Let’s back up a little bit.

After last week’s episode, it’s been over a month since Rio shut the ladies down. They’re itching to get back at it, Ruby (Retta) most of all, because Sara (Lidya Jewett) is at the top of the transplant list, and their family could be asked to come up with $100,000 any day now to pay for her new kidney.

Rio gives the ladies a job: Pick up a truck and bring it to him. The ladies hem and haw over whether they should do it, though, because what if Rio’s boy who flipped has told the cops about the truck? They finally take the truck, being very smart to use two decoy trucks, but Beth (Christina Hendricks) still gets pulled over. The truck doesn’t have a license plate, and she’s so squirrelly with the cop that the cop cuts open the lock on the truck and looks inside.

Thankfully, the truck is empty. Rio was just testing to see if his boy dimed him out (which he did). He also wanted to see if the ladies would pull this off. Beth is furious that she almost got caught due to Rio’s little test, and she hurls the truck keys in his face. He calmly picks them up and then tells her they’re done.

The chemistry between Hendricks and Montana has been wild all season, but this scene was on another level. I didn’t know if they were going to make out or if he was going to attack her — and that is not an easy dynamic to pull off. Also, when he called her Elizabeth? That was super hot. If they never hook up, that is going to be so sad for this show and its viewers.

Anyway, the ladies are out and Beth is pretty depressed about it. Of course, she’s terrified of going to jail and what would then happen to her children, but there’s a part of her that’s sad about both her life of crime going away and also losing her relationship with Rio. And you can tell she’s angry at him in the way you get angry when someone you have feelings for pushes you away. She’s hurt and she wants to hurt him back, so she suggests to the ladies that they get him sent to jail.

They’re down to do it, but there’s no way that’s how this season ends, so I’m very curious to see how this resolves itself.

There’s one thing that feels like it will definitely come into play, though I’m not sure how. The side plot this week is that Boomer (David Hornsby) sees Mary Pat (Allison Tolman) getting her groceries paid for by Annie (Mae Whitman), so he befriends Mary Pat to do some investigating. Both the writers and Hornsby played this perfectly, because at first it seems like he’s going after Mary Pat to take Annie down, and then it seems like he’s actually interested in Mary Pat romantically and it has nothing to do with Annie, and then it seems like he’s actually trying to help Annie by planting a recording device in a book at Mary Pat’s house.

I’m not sure exactly what that will do — maybe just get Mary Pat to stop blackmailing the ladies? I can’t see this show making a widow with four children be the fall guy for our main characters. It does solve the blackmail problem, but I also want there to be more to it than that. I don’t want this to be the way the show rehabs Boomer’s character, though, because — no, thank you.

Guess we’ll find out next week. This episode was a lot of set-up, but it should mean that next week’s episode is going full throttle, especially because at the end of this week’s hour, Sara gets a kidney, which means Ruby and Stan (Reno Wilson) are on the hook for $100K, like, now.