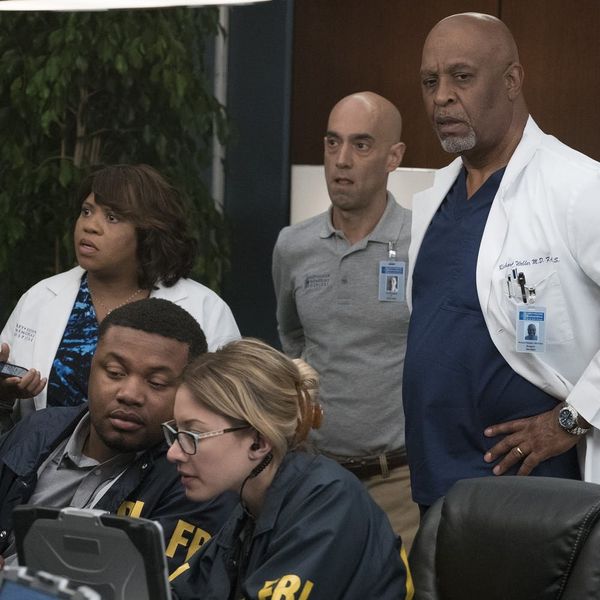 After 13 seasons, we were starting to wonder if there was anything Grey’s Anatomy hadn’t done. We’ve had hospital shootings, fires, bombs, ferry accidents, multiple doctors with brain tumors… what could possibly make for a hectic winter finale? But Grey’s managed to surprise us with something we actually haven’t seen before in this show: cyberhacking.

Meredith is still high on her Harper Avery win, giving interviews about her accomplishment. Jo, meanwhile, is celebrating some news of her own. She’s been made the new “Bailey,” AKA the leader/chief of the new interns, and she’s nervous as all heck. Her first order of business is to assign the interns to surgeons. Naturally, everyone wants Meredith, who chooses the guy who dropped his glasses. Because Meredith loves picking those interns who just want to grow and become better!

Jo and Alex end up with an intern named “Pony,” and together, they deal with one of Alex’s patients: a girl who has a blood vessel disorder. Maggie and Jackson’s patient is a man named Claude, who has lung congestion. He needs risky surgery, and the only person who can sign off on it is Claude’s daughter — whom he’s just met. She doesn’t feel comfortable being any kind of daughter to him, and she certainly doesn’t feel comfortable signing the release form.

In the OR, things turn hectic as heart monitors start to go haywire, showing patients flatlining when some of them were just sleeping. Basically, every monitor and computer and technology issued tool in the hospital is malfunctioning, and by the time Bailey gets IT to help, it’s too late. A hacker sends a message saying they have all of Grey-Sloan’s medical records, and if the hospital doesn’t pay, they’re going to be destroyed.

Naturally, everyone turns on Bailey, who tries to deal with the chaos as best she can, telling doctors to make sure patients know nothing is out of the ordinary. (Which is hard to do when the FBI shows up, but oh well.)

Not surprisingly, the hacking incident soon starts to cause issues. At least it’s good for Webber, who thrives on this kind of situation and can take some charge again. He instructs the doctors how to move forward without technology, and shows them tricks for how to care for their patients without the ability to use machines to help. But there’s still the issue of ransom, and Bailey realizes that the hacker wants so much money because they announced that contest with Jackson. So she wants to pay the ransom through an anonymous donor, which the FBI obviously disagrees with.

Arizona, meanwhile, has a situation of her own: She ends up with a pregnant patient who tried to give birth at home in a kiddie pool. Arizona can’t access any meds to help her out, so the patient has to do this the natural way. Fun!

Elsewhere, Maggie and Jackson find out that they grew up around each other at the same Boston country club — except Jackson was a member and Maggie was a worker. Serendipitous!

Things are pretty dire with the hacking situation, though, and Bailey and Owen are getting fed up that the FBI isn’t doing anything to help.

And just to add the last bit of salt to the wound before we leave our doctors for awhile, Jo, while on a mission to save the kid she’s working on with Alex, runs into Paul, her estranged husband. So, yeah. That’s going to be a thing.

What do you think of this new crisis to hit Grey’s? Tell us @BritandCo.