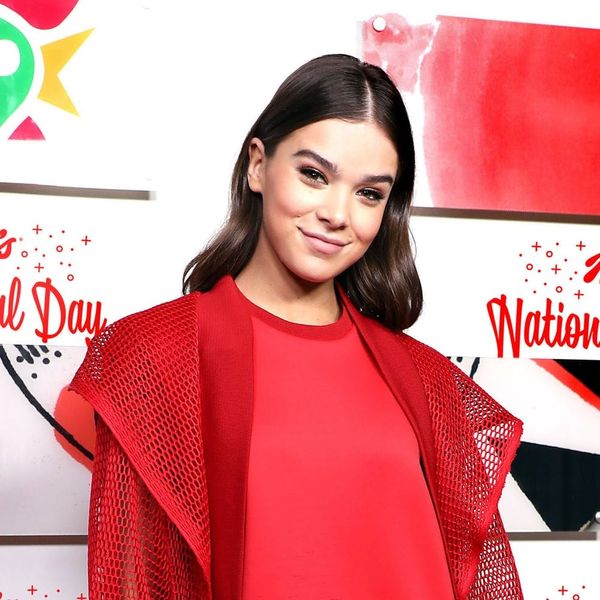 Hailee Steinfeld has all but taken over the style scene in recent years, slaying red carpets left and right (see: the Vanity Fair Oscars after-party or the 2017 AMAs). But her biggest wardrobe staple is a basic you probably already have in your closet.

“Honestly, when it comes to basics? A good white tee and a good pair of jeans,” she tells Brit + Co, citing Levi’s — the same denim brand that outfitted the entire Kardashian-Jenner clan for the family’s Christmas card — as her favorite.

The “Love Myself” singer is equally chill when it comes to her beauty routine — at least when she’s living out of a bus, like she will be from July through September when she joins Charlie Puth on their joint summer tour. “Hydrating, moisturizer, and a little under-eye concealer,” she laughs ticking off her travel secrets.

The answers, while surprisingly practical, are ones that would likely make her newest film character proud. Come December 21, we’ll see Steinfeld make her debut in The Transformers franchise as teenage mechanic Charlie Watson in Bumblebee, a prequel to the original 2007 Transformers film.

Though it’s a role that differs vastly from her last big screen stint as Emily Junk in Pitch Perfect 2 and 3, it’s one that Steinfeld, 21, was immediately attracted to. “She’s a bit of a tomboy. [She has a] sort of edge [and a] respect for herself that I was really drawn to,” she says. “It’s the sort of complexity that a real teenage has.”

For now, though, the “Let Me Go” singer is laser-locked in on her other day (and night!) gig: her music career. And, with her sophomore album on the way and a guest advisor spot alongside Kelly Clarkson on an upcoming episode of The Voice, things will only heat up from here.

“Right now, music is the main focus,” she shares. “[Touring] really truly is a lifestyle. [It’s] amazing, I love every single second of it — every single night you’re in front of fans and you get to interact and connect with them through music.”

In short? It’s fun. “Pieces of advice like, ‘Have fun’ or ‘Don’t take things too seriously,’ really resonated with me,” she says. “I think just staying true to yourself is one of the most important things anyone can do in any [kind of] work.”

For Steinfeld, that includes celebrating the everyday little things that make her happy: like, say, cereal, for instance. In fact, when we speak to her, she’s actually at the Kellogg’s Café in NYC to help pay homage to one of her favorite foods with a live performance.

“Anyone who knows me knows that I have a crazy obsession with cereal, so it only felt right to pair up with Kellogg’s and celebrate,” she says, adding, “You can never go wrong with Frosted Flakes.”

What’s your style staple? Share with us over @BritandCo.

Nicole Briese
Nicole is the weekend editor for Brit + Co who loves bringing you all the latest buzz. When she's not busy typing away into the wee hours, you can usually find her canoodling with her fur babies, rooting around in a bookstore, or rocking out at a concert of some sort (Guns N' Roses forever!). Check out all her latest musings and past work at nicolebjean.com.
Beauty Hack
Celeb Style
Beauty Hack Celebrities Celebrity Beauty Celebrity Style Denim Jeans
More From Celeb Style