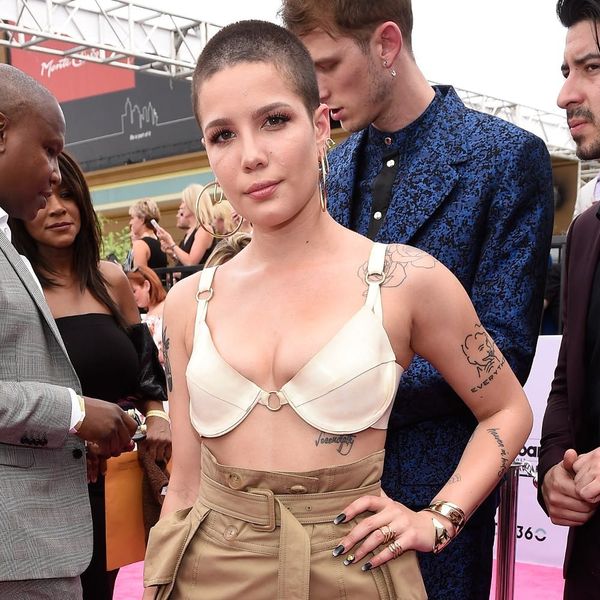 Halsey is on a shade-throwing roll! Just days after calling out Iggy Azalea over cultural appropriation (to which Azalea replied with a Mariah Carey-ish “I don’t know her”), Halsey is doling out more jabs, this time at fellow singer Demi Lovato.

The insult came when Halsey gave an interview with Paper magazine to discuss her struggles as a bisexual woman. “There’s bi-phobia from the straight community and from the [LGBTQ+] community. There’s a lack of acceptance,” she said. “It happens in TV all the time when people write bisexual characters as going through a phase or struggling with something. It’s part of some mental breakdown or rebellion storyline, and that just sucks.”

She went on to address her own industry, along with the fact that many pop songs use bisexuality as an enticing taboo. “That narrative is so f**king damaging to bisexuality and its place in society. That’s something I’ve had to fight my whole life, and something I still fight… [songs with themes like] ‘Don’t tell your mom’ or ‘We shouldn’t do this’ or ’This feels so wrong but it’s so right.’”

If you picked up on the fact that Halsey was directly referring to Demi Lovato’s 2015 single “Cool for the Summer,” you’re not alone.

You know a song is a hit when people are still talking about the lyrics two years later. 💁🏻#shhhhdonttellyourmother

Not only did Lovato’s fans totally call her out for the shade, but Lovato herself caught wind of the situation, tweeting her own quip of, “You know a song is a hit when people are still talking about the lyrics two years later. 💁🏻#shhhhdonttellyourmother.”

Halsey’s response came in the form of a song which focuses on the industry’s failure to treat bisexuality in a fair way. Featuring Fifth Harmony’s Lauren Jauregui, who is herself openly bisexual, “Strangers” features lyrics like “We’re not lovers, we’re just strangers / With the same damn hunger / To be touched, to be loved, to feel anything at all.”

Check it out below.

What do you think about Halsey’s view on pop songs using bisexuality as a gimmick? Let us know @BritandCo!

Desiree O
Desirée O is a ‘Professional Bohemian’ who loves anything and everything related to the arts, entertainment, and pop culture. She ADORES being a ‘Newsy’ for Brit + Co, covering all of the latest tidbits of awesomeness that you want to read about. When she’s not writing, she’s either making messy art, going on long adventurous walks with her camera, or poking around over at bohemianizm (http://www.bohemianizm.com/). You can find out about Desirée O and her work at http://DesireeO.com/ or follow her on Twitter @DesireeO.
Controversy
Celebrity News
Controversy LGBTQ