Today’s Great Dating Debate: Do Women in Headphones Want Men to Talk to Them? 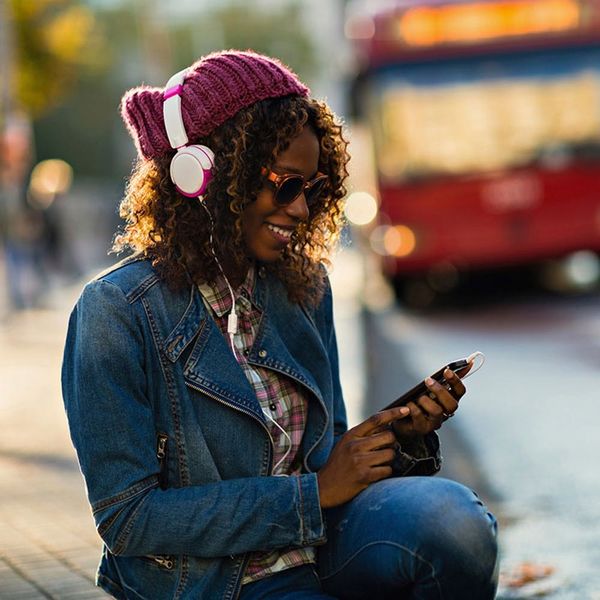 When I’m brunching with friends on Sunday morning, dating is a topic that is consistently discussed. How much it sucks and how sometimes it doesn’t. How frustrating the apps are. One of the top complaints: How increasingly rare it is to be approached by a cute, potential partner IRL. Contrary to what Carrie Bradshaw’s single girl experience may lead you to believe, you don’t often get hit on in the subway by someone like Aiden. Approached by a dude who can’t take no for an answer? Sure. A buff vet who saves puppies lives on the reg? Yeah, not so much.

But here’s the thing: If we as woman are open to that rare Prince Charming courting us on the carriage — er, bus — home, are we crushing our chances by slipping on headphones and jamming out to Frank Ocean’s new album? The Twitter universe is currently debating this question.

The debate all started when a user posted this snapshot of an article from The Modern Man. The article was posted back in 2013, but the topic is still as relevant today as it was back then. Throughout the article, the author offers up some ~questionable~ advice on how to approach a woman wearing headphones. A few first steps include: standing in front of her for a minute and having a confident smile. Then the author advises that, once you get her attention, ask her, “Can you take off your headphones for a minute?” while miming taking headphones off your head.

The user who snapshotted the post was unimpressed and answered the “How to Talk to a Woman Wearing Headphones” headline with a blunt, “You don’t.” Her tweet has since been retweeted and favorited thousands of times. Naturally, the Twitterverse really went in on the topic, with almost everyone siding with her.

Why stop at headphones? How to talk to a woman: in a restroom, an ambulance, or while she's on a date with someone else. Go next level

I got a woman in headphones to talk to me once. She was working in the call centre. Neither of us actually wanted the interaction to occur

Common mistakes guys make when approaching a woman in headphones:

APPROACHING A WOMAN IN HEADPHONES

But is a pair of headphones really as sure a sign of unavailability as a wedding ring? As a single woman who wears headphones often while around town, I would say it’s something you take on a case by case basis. Do I enjoy listening to Ira Glass or Spotify on my ride to or from work? Sure. Would I also be up for chatting with a vet who saves puppies lives if he was sat next to me? You can put me down as a firm yes on that. Maybe don’t approach me in the way The Modern Man suggests, though. Standing in front of me and smiling may give off more of a creepy than interested vibe. But do it in a way that seems a little more natural and sure, I’ll pause Mr. Glass’ smooth storytelling capabilities for you. But am I alone in this thinking? I decided to take a poll around the B+C office (which is primarily made up of millennial women) to find out what others thought.

Of the 10 ladies I asked, all of them told me wearing headphones is almost always a sure sign that they do NOT want to be approached. However, 90 percent of them said that if they see someone they’re potentially interested in while on a bus or walking around, they would make a point to take either both or one ear bud out to show they’re up for being approached and talked to.

But when all is said and done, this whole debate isn’t really about whether women are up for being hit on or not. When it comes down to it, this is about respecting women’s privacy and boundaries. The ladies of the Twitterverse (and Brit + Co HQ) have spoken, and they all seem to agree that headphones are a pretty clear sign they would like to be left alone. Frank Ocean, Ira Glass or whoever is blasting out of their ear buds is currently priority, and unless they VERY obviously signal otherwise, please be respectful of that.

Cortney Clift
Cortney is the senior writer and special projects editor at Brit + Co. She typically covers topics related to women's issues, politics, and lifestyle. When she's not buried behind her computer you'll find her exploring New York City or planning her next big adventure.
Dating
Relationships
Dating twitter
More From Relationships