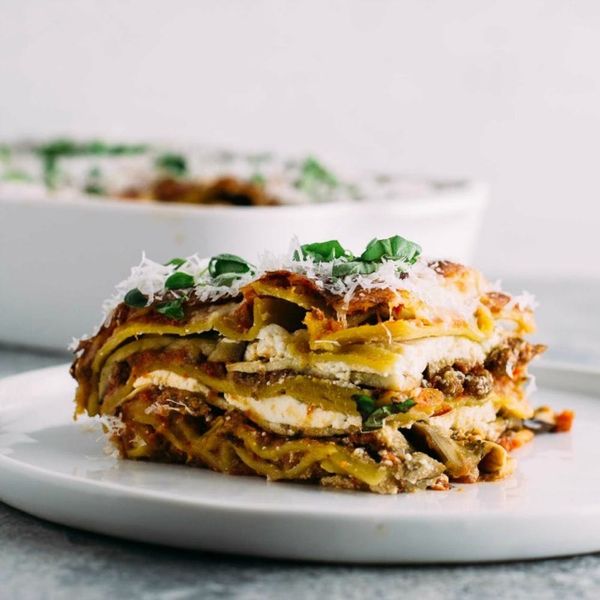 Frozen food is a go-to for busy college students, working professionals, and families alike. But when you take the time to actually read the nutrition label on all your fave heat-and-eat meals, it can make you start thinking about cooking something from scratch. A light and citrusy salad isn’t always what you crave after a long day, but whipping up an elaborate, cheesy pasta meal can take a little too much effort (and doesn’t get you all the nutrients you need). Classic comfort foods always hit the spot, but the frozen versions we all rely on just aren’t that great for you. These 15 recipes are much healthier, but still easy to prepare, so you can take a break from the frozen aisle the next time you go shopping.

The best dinners taste great but don’t require a ton of work. This chicken Parm hits both marks, giving you a healthy meal in just a half hour. (via Healthy Seasonal Recipes)

Try your hand at this flavorful rigatoni and chicken sausage skillet recipe. (via Spoonful of Flavor)

An Instant Pot makes quick work of this healthy Alfredo dish. Spaghetti squash is ready in less than 10 minutes, and the rest of the meal is quickly cooked in the same pot for easy clean up when you’re done eating. (via Stay Snatched)

Fried chicken that’s healthy and actually stays crispy isn’t an impossibility. This super-seasoned recipe will convince you it’s worth the extra 10 minutes to make this meal, not microwave it. (via Kevin is Cooking)

Chicken fried steak is the ultimate comfort food, but the frozen version can be not only unhealthy, but a rubbery nightmare too. Try this version, made from scratch, and bake in the oven so it’s less oily than the original. (via Dizzy, Busy, and Hungry)

Chewy meatballs covered in a wallpaper-paste sauce is what you usually get from frozen Swedish meatballs. Instead, make this Paleo version, which is both healthier and better tasting. (via A Calculated Whisk)

This made-from-scratch recipe is made in just a half hour, for comfort food you can feel good about. (via Recipe Tin Eats)

Turkey that’s actually moist isn’t that hard to make when you have a slow cooker handy. Just a few minutes of prep is all you need to have this healthy, protein-filled meal waiting for you at the end of the day. (via Slow Cooker Gourmet)

Tender, homemade meatloaf is so much better than the squishy stuff in a frozen dinner. Keep it healthier too, with this Whole30 and Paleo-compliant recipe. (via Paleo Running Momma)

Made with tender slow-cooked turkey, these burritos are packed with veggies, beans, and rice. That makes them a healthier option than store-bought frozen burritos, but here’s the kicker — you can freeze your leftover burritos for quick, on-the-go meals later in the week. (via Slow Cooker Gourmet)

Oily frozen pizza with funky, overly spiced sauce is no match for the real deal. Homemade pizza is a surprisingly simple affair (don’t be afraid to get pizza dough from the store), and you can customize the toppings exactly how you like them. (via Cooking Is Messy)

Macaroni and Cheese With Broccoli

Homemade mac and cheese is just as creamy as the frozen stuff, but doesn’t have the same staggering levels of sodium. This recipe even mixes in some broccoli, to give your comfort food a little nutritional boost. (via Healthy Seasonal Recipes)

Lasagna can still be full of your favorite ingredients (savory ground beef, lots of cheese), and be healthier than your typical frozen meal. This one is made better with extra veggies and green lentil pasta, and best of all, it takes just an hour to make. (via Also the Crumbs Please)

Chicken pot pie is one of the ultimate frozen foods, but between the weird chicken (is that really chicken?) and nearly unbelievably high sodium levels, it’s just not great for you. Make it from scratch, however, and you can feel free to indulge — this recipe is classic comfort food, but it will nourish you too. (via Well Plated)
Justina Huddleston
Justina Huddleston is a food writer living in Los Angeles. When she's not busy writing, she spends her time in the kitchen creating both virtuous and decidedly junky vegan food. Buffalo chickpea pizza, anyone? She's also been known to eat a plain block of tofu or beans straight out of the can for lunch, but somehow those culinary adventures don't make it to her Instagram. You can follow Justina on Twitter or see what's cooking in her kitchen on her blog, A Life of Little Pleasures.
Dinner Recipes
Recipes
Dinner Recipes Make-Ahead Recipes recipe roundup
The Conversation