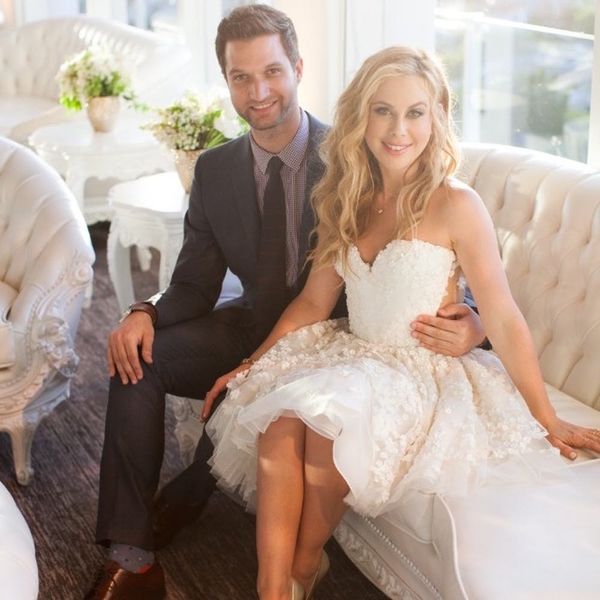 Michael Phelps isn’t the only Olympian with a big reason to smile these days. While he’s busy with little baby boy, Boomer, Tara Lipinski was celebrating her engagement to Fox Sports producer Todd Kapostasy in a truly gold-medal worthy party that took place at Mr. C in Beverly Hills, California. Noticeably absent from the party was any hint of peach, which, funny enough, is a color Tara considers “bad luck” since back in her competition days!

The 33-year-old celebrated her engagement in a lovely Mark Zunino dress that featured a fitted top-section and a knee-length skirt that could be removed for something a little sleeker when the future-bride was ready to get down on the dance floor.

Tara, who won the ladies’ singles figure skating Olympic gold medal at the 1998 Winter Olympics at 15, was the youngest Olympic gold medalist in ladies’ figure skating in an individual event. But her gold medal isn’t the only thing gilded by the Midas touch at the event. The bride-to-be chose gold and white as her engagement party theme colors. Also, check out girlfriend’s golden platform pumps!

As a nod to Tara’s Olympic medal and Todd’s Emmy, white and gold accents were carefully placed throughout the space by wedding planner Mindy Weiss in conjunction with Wedding Paper Divas. The party even included custom cocktail napkins for a Pinterest-worthy touch.

Even the invitations and trays were works of art. Literally. Wedding Paper Divas’ invitations featured a painting commissioned by Todd picturing himself proposing to Tara (OMG sweet!), while decorative acrylic trays by Shutterfly displaying the same image brought Champagne to the guests to help them celebrate the adorable pair.

The duo, who became engaged last year, celebrated with family and friends, including Tara’s oft-partner-in-crime and fellow Olympian skater, Johnny Weir. The pals even went for a spin around the dance floor. Ice dancing, IRL dancing, we’re sure the duo had a blast.

We wonder what Tara’s wedding colors are going to be. Our bets are on gold!

Do you love that Tara added a golden touch to her engagement party? Tweet us @BritandCo!

Desiree O
Desirée O is a ‘Professional Bohemian’ who loves anything and everything related to the arts, entertainment, and pop culture. She ADORES being a ‘Newsy’ for Brit + Co, covering all of the latest tidbits of awesomeness that you want to read about. When she’s not writing, she’s either making messy art, going on long adventurous walks with her camera, or poking around over at bohemianizm (http://www.bohemianizm.com/). You can find out about Desirée O and her work at http://DesireeO.com/ or follow her on Twitter @DesireeO.
Celebrity Wedding
Celebrity News
Celebrity Wedding Engagement