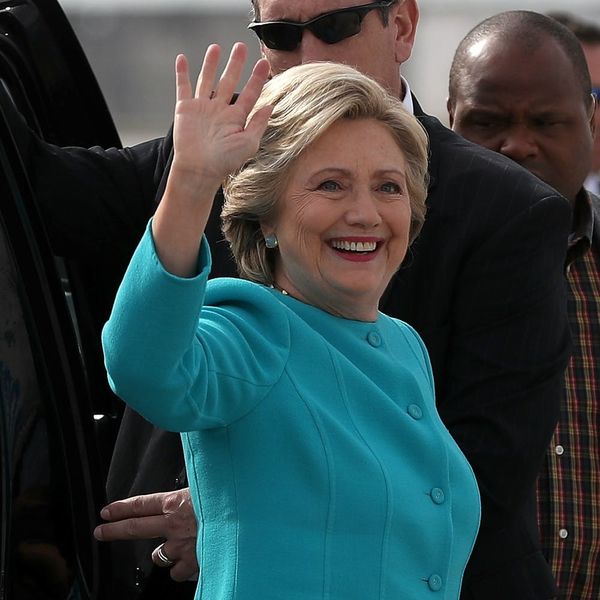 With just days to go before the big Presidential election (nine, to be exact ― are you registered to vote?), both camps are lobbying hard to present themselves in the best light possible.

While up until now, much of the election’s negative focus has remained on Republican candidate Donald Trump (not entirely surprising, given his Access Hollywood video scandal and claims of sexual assault from a growing number of women), a bombshell announcement on the part of the FBI saying that they were re-investigating the since-closed case of Hillary Clinton’s emails has eyes shifting toward the Democrats.

The discovery of previously unexamined evidence in Hillary’s original FBI investigation, which accused her of potential criminal conduct while mishandling classified information, was made while probing into an unrelated sexual misconduct case involving former Democratic Congressman Anthony Weiner and his wife Huma Abedin (who has sadly been mom-shamed for Anthony’s actions). Agents discovered that a shared computer of Anthony and Huma’s (a Clinton aide) contained more emails that needed to be examined for potential breaches of classified information.

Though Huma told investigators back in April that the emails she sent through Clinton’s private server (one of four that she regularly used) regarded Clinton’s appointments and personal affairs only, her testimony suggests that it was also possible that classified emails may have been transferred to either Clinton’s server or any of her other unclassified accounts when printing documents (Clinton’s preferred method of reading). According to Newsweek, this puts Huma (not Hillary) at risk of committing the criminal offense of mishandling classified information, but as these emails were missed in the original investigation, FBI director James Comey has made the decision to review them more thoroughly with regard to Hillary’s case.

The DOJ typically makes it a point not to comment on investigations close to election dates so as not to influence the voters, with many taking aim at James Comey for doing just that. Hillary, for her part, urged the FBI to get any relevant information to the people as soon as possible.

“Voting is underway, so the American people deserve to get the full and complete facts immediately,” she said at a news conference. She went on to ask “the bureau to explain this issue in question, whatever it is, without delay.”

Though she says she herself is pretty clueless about what the emails may yield,“she is confident whatever (the emails are) will not change the conclusion reached in July.”

Trump’s camp has a different take, however, with Trump commending James and the rest of the FBI for “having the courage to right the horrible mistake that they made” when they cleared Hillary of all charges post-investigation.

We must not let #CrookedHillary take her CRIMINAL SCHEME into the Oval Office. #DrainTheSwamp pic.twitter.com/GtPkj4xIz6

While it remains unclear exactly what the emails contain or if their presence will have an impact on Hillary’s chances in the election (which saw her leading Trump by six points in a recent CNN poll), it’s one more blip on the scandal radar in the never-ending saga that has been this year’s CRAZY election.

Will this announcement influence your voting decision at all? Share @BritandCo.

Nicole Briese
Nicole is the weekend editor for Brit + Co who loves bringing you all the latest buzz. When she's not busy typing away into the wee hours, you can usually find her canoodling with her fur babies, rooting around in a bookstore, or rocking out at a concert of some sort (Guns N' Roses forever!). Check out all her latest musings and past work at nicolebjean.com.
Controversy
Politics
Controversy Politics