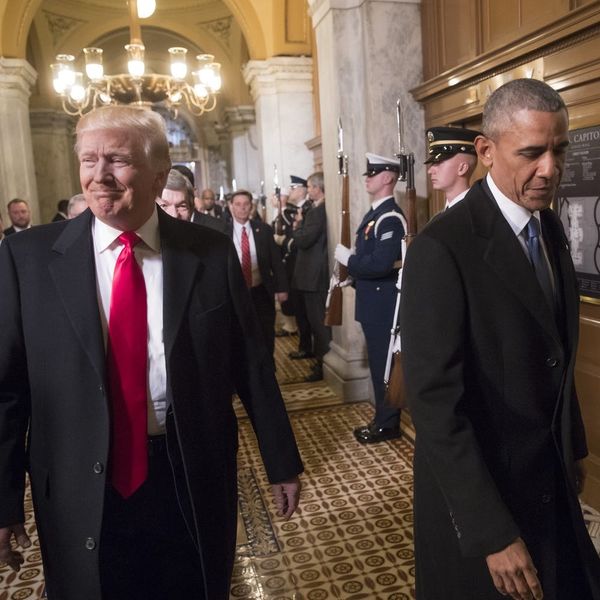 With President Trump churning out orders fast and furiously (read up on all that’s happened in his first week alone here), change has been in no short order in recent days, but one thing that has, for the most part, remained largely the same — for now — appears to be Obamacare.

Ironically, President Trump’s first order of business was “to seek the prompt repeal of the Patient Protection and Affordable Care Act,” with plans announced Thursday to nix all advertising for the program in the final days of its enrollment period. As of Friday, however, he seems to have had a change of heart, at least with regard to the ads.

According to Health and Human Service officials via Politico, the administration wasn’t able to pull out of radio and television advertising that the Obama administration had paid for through the end of the month (AKA the last day for coverage enrollment through the program), although $4-5 million was cut from advertising through other mediums, with funds set to be returned to the US treasury.

Advertising wasn’t the new administration’s only concern, however: The Washington Post reports that a recording of a closed-door meeting discussing a repeal of the Affordable Care Act revealed trepidation from even Republican lawmakers, who worried over how they might implement a replacement plan by repeal time, how to keep the health insurance market from crashing and even how to cope with the social ramifications that would result from defunding Planned Parenthood (which singer Halsey just made a sizeable donation to).

The latter was reportedly addressed by NY House Representative John Faso, who said, “We are just walking into a gigantic political trap if we go down this path of sticking Planned Parenthood in the health insurance bill…If you want to do it somewhere else, I have no problem, but I think we are creating a political minefield for ourselves — House and Senate. He added, “Health insurance is going to be tough enough for us to deal with without having millions of people on social media come to Planned Parenthood’s defense and sending hundreds of thousands of new donors to the Democratic Senate and Democratic congressional campaign committees. So I would just urge us to rethink this.”

California Representative Tom McClintok then pointed out the obvious — that whatever moves are made will likely define the administration, and thus shouldn’t be taken lightly. “We’d better be sure we’re prepared to live with the market we’ve created. That’s going to be called Trumpcare. Republicans will own that lock, stock and barrel, and we’ll be judged in the election less than two years away,” he fretted.

While things are still very much up in the air, it’s comforting to know that they are, at least, acknowledging concerns and giving them thought.

How do you think the government should handle the replacement of Obamacare? Share @BritandCo.