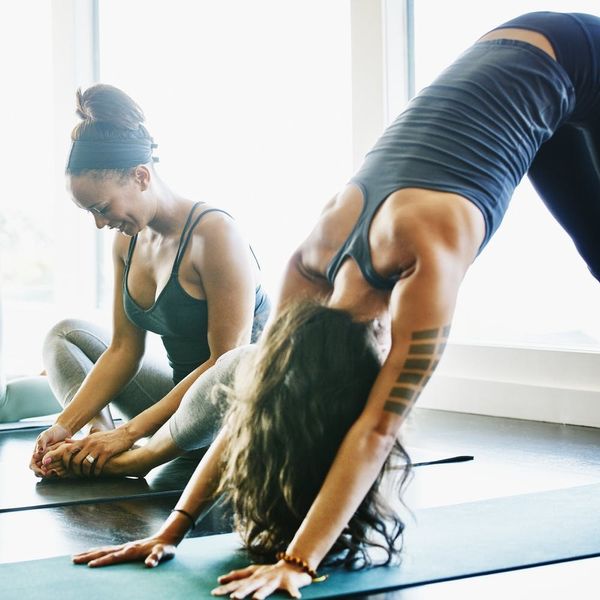 Admit it. Sometimes, you wear your workout clothes more than once before washing them. Maybe you even do it more than sometimes. It doesn’t really seem like a big deal, especially if you’re doing a lighter workout like yoga. Plus, washing your workout clothes after every single use when you’re working out five times a week seems like a major hassle. To find out exactly how bad it is to wear your favorite leggings more than once, we tapped Frank Yao, a biomedical engineer and founder of Physiclo, a unique line of fitness apparel featuring built-in resistance technology.

According to Frank, there’s a short answer and a long answer to the risks of wearing activewear multiple times. “The short answer is that it’s not recommended to re-wear your workout clothes because bacteria and yeast tend to rub off onto your clothing, especially when you sweat,” he explains. When you put those dirty clothes on again later, the bacteria will have multiplied, which can lead to seriously stinky odors and potentially even skin irritation or infection. Yikes.

The longer answer is a bit more complicated. Frank says, “It’s actually not bad ALL the time. It depends on quite a few factors, such as how much you sweat in the clothes, whether you stuffed it in a hamper or left it out afterward and even the type of fabric.” This is because different fabrics collect different kinds of bacteria, which in turn have different effects. Some kinds of bacteria are way more likely to produce foul odors, while others have the added risk of infection. Here are the three main factors you need to consider when deciding whether to wear something again.

1. Fabric: So the two main problems with re-wearing your workout clothes are odor and infection, with odor being way more common than infection. Both synthetic and natural fabrics (i.e. polyester vs. cotton) will allow the bacteria that causes these problems to reproduce, but Frank says that the type of bacteria that flourishes is where the difference lies. “Micrococcus grows the most on polyester because it’s an aerobic bacteria that prefers the open-air lattice structure of synthetic fibers,” he explains. The result is what causes your polyesters to smell worse than cotton, especially when re-worn, since micrococcus is known for its ability to create really nasty odors from sweat.

On the other hand, cotton tends to have the highest growth of a bacteria called Staphylococcus hominis, which is mostly harmless but can occasionally cause infections under certain conditions. “So in short, it’s probably worse to re-wear your high-quality synthetic workout clothes, mainly because of the stench,” he says. An exception to this rule is if you have workout gear that has been treated with antimicrobials like silver, copper or gold particles to prevent bacteria growth.

2. Air: Infections aren’t common, but they definitely can happen, and one of the major factors that influences this is whether you allow your clothes to dry fully before you wear them again. “Anytime you wear tight, wet clothing for too long, especially when you put on yesterday’s not-completely-dry yoga pants, it causes moisture to be trapped and retained, which can lead to fungal or yeast infections.” Oof, those are the worst. He notes that the risk of infection is also higher when your immune system is compromised or if you have any open cuts or sores. Another issue to look out for if your clothes are damp? Acne. “Re-wearing sweaty, dirty clothes can cause dirt and acne-causing bacteria to accumulate in your pores,” says Frank. Definitely not ideal. If you must re-wear something the next day, he suggests leaving it somewhere where it will dry quickly, as opposed to throwing them in a damp hamper.

3. Type of Workout: If you’re doing a lighter workout, you might not need to worry as much about bacteria growth. “It may be okay to re-wear your workout clothes after less intense activities where you don’t sweat as much, such as yoga or power walking, as opposed to a spin class or a CrossFit session,” Frank explains. Another thing to remember though, is that where you’re wearing your activewear makes a difference too, since your clothes will pick up bacteria from your environment and not just your body. “Even if you don’t sweat that much at the gym, your clothes will be picking up bacteria from other peoples’ sweat left on gym mats and equipment.” That’s pretty gross, and maybe a good enough reason in itself to wash your workout clothes between every use.

Do you ever re-wear your workout clothes? Do you think it’s a big deal? Tell us why or why not @BritandCo!

Julia Malacoff
Julia is a writer, editor and proud life-long vegetarian based in Brooklyn, NY. An avid traveler, meditation enthusiast and exercise junkie, she stays active in every new locale she visits.
Fitness
Health
Fitness Healthy Living
More From Health