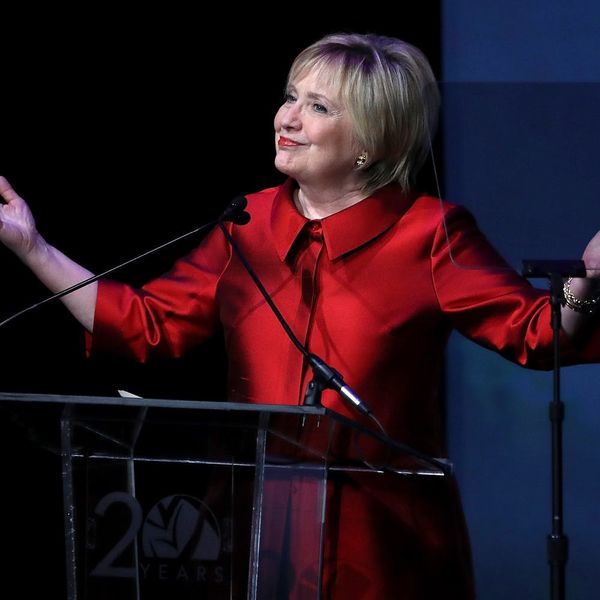 Hillary Clinton hasn’t been far from the public’s mind lately. She showed up in Donald Trump’s photo ops, she wore a bright red power pantsuit to a Girls Inc. luncheon in solidarity with A Day Without a Woman, and on Wednesday (International Women’s Day), the original nasty woman wore red again at the Vital Voices Global Leadership Awards. But it was her brand new hairstyle that caught everyone’s eyes.

We would never fault someone for changing up their look — in fact, we think it’s a good idea — but needless to say, the internet already has lots and lots of opinions. The Twitterverse, in particular, was having a hell of a time deciding how it felt about the bangs. Some loved the new look.

Loving the hair @HillaryClinton ! You look so energized and beautiful. @ChelseaClinton your kids have a glam-ma!💖 pic.twitter.com/sPtBzKUQ4e

As soon as I turn 30 I'm getting Hillary Clinton's haircut

Thinking of getting a Hillary tattoo on my arm. Election haircut or new bangs? @HillaryClinton #bangs

@HillaryClinton saw your message on #InternationalWomensDay. The new haircut/style looks fab and thanks for championing for us everyday!

But not everyone was a fan. Hey, you can’t win them all?

Random Thoughts: I liked the longer haircut Hillary Clinton had in 2012.

Ultimately, it doesn’t matter how her hair looks; what matters is Clinton’s message: Inspiring young girls and women to stay ambitious and to follow their dreams, because that’s how you change the world. Empowering each other is what’s important.

A sweet haircut is just an added bonus.

What do you think of the work Hillary is doing? Tell us @BritandCo!

Shea Lignitz
Shea can be found in the nearest bookstore or brewery, exploring the great outdoors, or blasting Led Zeppelin. She grew up in the cold and rain of Northern California's redwoods but is currently wandering around Texas.
Haircuts
Hair
Haircuts Politics