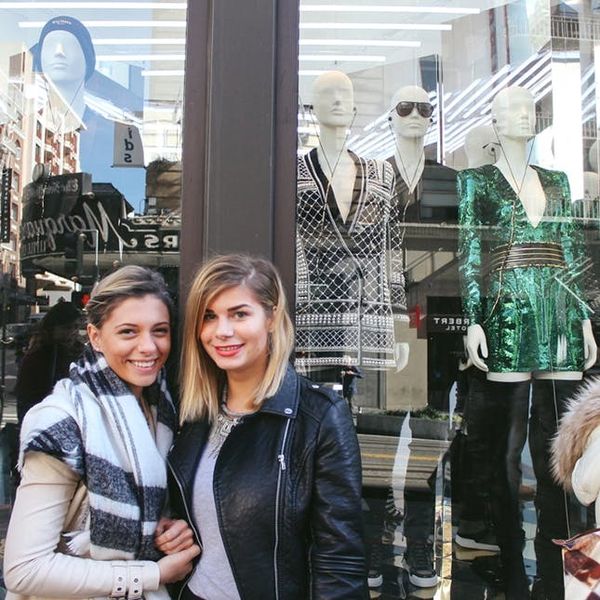 On the other side of the country, our news editor Kim Wang set out to see how New Yorkers were handling the clothing chaos. We each talked to a handful of employees and shoppers — some who were still patiently waiting in line and some who had just made purchases — about what went down during the morning. Here’s what it’s like to actually shop Balmain x H&M.

Beth Wischnia: You guys bought so much stuff. What did you score?

Jenny Han: Well, this is for four people. All of these bags aren’t just for me. We came last night from Berkeley at 2am. We were in the Westfield Mall first to hit up that H&M and also had a few people in line here. That was our strategy.

BW: What about this launch made you want to get in line at 2am?

JH: For me, it was more about the experience not actually the clothes themselves. All the hype — I wanted to understand why everyone was freaking out about it.

BW: What item are you most excited about?

JH: I only got one item! I wanted to take something back from the experience. It’s a blouse with black and white stripes and buttons on the sleeves.

Beth Wischnia: What was your shopping strategy?

Emilio Luna: To get here right after I got off of work last night in Stockton which is almost a 2-hour drive from San Francisco. I got here at 11:30 last night. I was out here all night and made some friends. I didn’t sleep at all. I had a chair, some blankets, a lot of coffee and Rockstar energy drinks. Caffeine is an important component to this.

BW: What about this launch got you to come out here so early?

EL: The name Balmain did. You really you can’t go wrong with Balmain. Their stuff [in the H&M collab] is super cheap, their jeans were only $100 which is crazy compared to the $1,500 they usually are. I didn’t get any of those, even though that’s really what I wanted. I wanted the jeans!

BW: What time did you go inside the store?

EL: I went into the store at 9:45 this morning. They opened at 8am. When I went in the store, it was basically completely gone. All the jeans were gone. There were a lot of people that came in with larger groups that actually bought out all the stuff like they usually do. That kind of thing happens a lot with big collaborations like this. They took a lot of the stuff that I wanted.

EL: Last year at the Alexander Wang x H&M collaboration launch, I did the same thing. I came a little later last year, though, at 6am, and didn’t end up getting anything that I wanted.

BW: What item are you most excited about having purchased today?

EL: The sunglasses. The case is awesome — it’s kinda like velvet. The best part of all is the gold on the glasses. I’m all about gold everything. The glasses are really nice and only $60. I also got a couple everyday shirts for layering and a beanie because I needed something to buy. I had an $800 budget and only spent $200 on four items so I was just looking for more stuff to buy toward the end.

BW: Would you say this was a successful shopping day for you or are you bummed?

Beth Wischnia: When did security for this launch start?

Otis Sanders: It started at 2am. People were out here lined up.

BW: Has anything gotten out of hand?

OS: Fortunately, nothing crazy has happened. We’re here to just basically help people stay in their places in line and keep things from happening. It’s been pretty disciplined.

BW: What is the process for getting into the store?

OS: They handed out wristbands from 6am — 9am and would let people go in groups of 20 at a time. It was very strict. You could only go inside for 15 minutes maximum. After that, everyone else would be let in groups of 10 at a time. Employees are enforcing the time limit as they monitor people coming into the store. They have it sectioned off upstairs with the fashions that are in demand right now.

BW: When did this store start prepping for this launch?

OS: Overnight. They started in the middle of the night and this morning it was ready to go.

Beth Wischnia: How long have you been in line?

Morgan Schaffer: Since 5:30am.

BW: Where did you guys come from?

MS: Santa Venetia, about 45 minutes away.

BW: What about this launch made it worth the trip?

BW: Anything specific you’re looking for?

MS: That green sequined dress, the blazer in the window — it has pearl studs on the front. Those are my two big items. Tess, who’s our new friend who’s been in front of us in line since 5am, is also looking to grab the green dress. Everyone wants the green sparkly dress.

MS: Cold! It was so cold but it wasn’t too, too bad. It’s been a long day. Everyone’s really nice in line, so we’ve made friends. You kinda have to.

Beth Wischnia: Why are you here?

BW: What about this collaboration made it worth it for you to wait in line?

MP: I love Balmain. I like his collection and his style. It’s militaristic looking; it’s unique.

BW: Where did you travel from to get to this store?

MP: I’m from Serbia but we were already in California. My friend and I decided that we should check the launch out because we knew it would be out today so we said that if we had time, we would go. We are here in California for one week. Even though I’m exhausted and jet-lagged, I’m hoping it’ll be worth it.

BW: What time did you get here?

BW: What is your strategy when you get inside?

MP: We heard you can only have one piece of each item. You can’t take a bunch of different sizes. We have to think about that but I guess we’ll see when we get inside.

Beth Wischnia: You look like you were able to get a lot of stuff! You must have gotten here super early.

Becky Tu: Yep, I did! This is my first time ever camping out because Balmain is basically one of my favorite fashion brands. I camped out since 10pm last night. I was going to give up the first hour — I was like, this really isn’t worth it. But it was a good experience and maybe next time I’ll bring a sleeping bag.

BW: Were you happy with the items you purchased?

BT: I didn’t really get exactly what I wanted but I’m happy overall. I did get the sparkly green dress everyone is talking about, though, but it’s not the one I set out to get. I wanted the embroidered dress that has the gold and silver embellishments. It’s a long sleeved, short dress that Kylie Jenner wore. I knew it was going to be a best seller so I didn’t really get my hopes up. But I did get the thigh-high boots and those were one of the three items I really wanted so I’m happy I got at least one of them.

BW: Were you happy with the cost of the Balmain x H&M items?

BT: Definitely. The boots cost $300 but that’s nothing compared to the normal price tag that’d be around $2,000. I also got a green fur jacket, two embroidered blouses, another pair of gold sandals. I stocked up. I don’t really shop so once I do, I go all out, especially if it’s a good price. I’m planning to go somewhere really nice with my new clothes!

According to the manager on duty at the Lexington and 59th store, people were lining up starting around 3PM *yesterday* and by midnight, the line had stretched all the way down the block. The staff had been preparing for weeks and they had a system in place allowing only 30 customers in the store for 30 minutes at a time. At that rate, all of the merchandise was sold out at noon — save for a few sad accessories they have stocked behind the upstairs cash register.

That didn’t stop the costumers from tearing into the stores when it was their turn. One of the employees still said people were “running and ripping the store apart” once inside. But H&M is a well-oiled machine now that they’ve had several major designer collabs under their belt — especially in a location as saturated with people as NYC — and by early afternoon, there were no more signs chaos from this morning and it was business as usual.

Did you hit up the Balmain x H&M launch? What did you experience? Share your thoughts in the comments below.