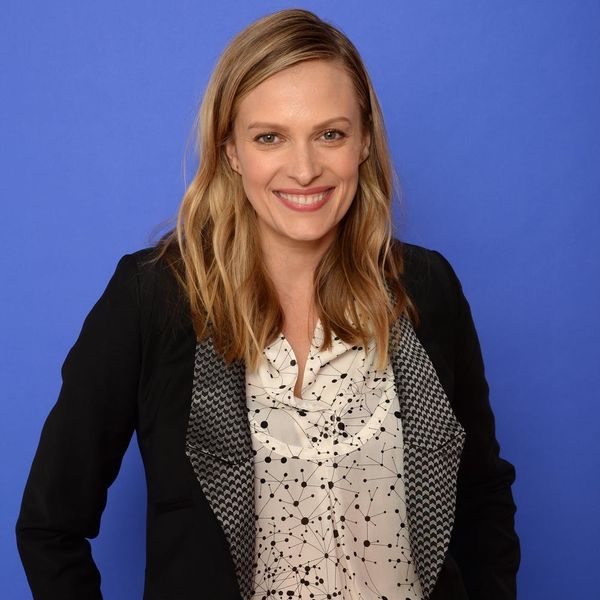 If you’re a fan of the Halloween classic Hocus Pocus, and you *might* be announcing a pregnancy soon, one of the film’s original stars, Vinessa Shaw, has just the announcement for you. After taking to Instagram last week to share the news of her own pregnancy, Shaw returned this week with the *perfect* Hocus Pocus-inspired announcement.

The picture invokes two of the movie’s most famous quotes — “Winnie, I smell… a child” and “It’s just a bunch of Hocus Pocus” — with an accompanying photo of a positive pregnancy test and a drawing of the three Sanderson sisters (played in the film by Sarah Jessica Parker, Bette Midler, and Kathy Najimy). “Maybe I should have used this for my pregnancy announcement??” she captioned the post.

Maybe I should have used this for my pregnancy announcement?? 🤣🤣🤣#anythinggoes

What she actually used was a photo of herself and her husband, Kristopher Gifford, in front of a backdrop with the words “Great news! I am pregnant” on it. “We are proud and excited to share that we are expecting a little one early next year!” she wrote. “My hubby is a graphic designer, so I hope you appreciate his cheekiness.”

Great News! We are proud and excited to share that we are expecting a little one early next year!...My hubby is a graphic designer, so I hope you appreciate his cheekiness 😉🐣💫

In Hocus Pocus, Shaw played Allison, love interest to Max, the unwitting virgin who awakens the Sanderson sisters, accidentally setting in motion a perfectly spooky and hilarious chain of events wherein the sisters try to continue their murderous streak of stealing the souls of children.

Hocus Pocus has become a major cult classic for Disney fans since its initial release in 1993. Disney Channel airs the movie every year leading up to Halloween, keeping it in every little witch’s spooky heart.

Since starring in the movie, Shaw has had roles in films including the terrifying TheHills Have Eyes remake and Nicole Kidman and Tom Cruise’s Eyes Wide Shut. This year, she starred in the Netflix original thriller Clinical.

Did you have a creative pregnancy announcement? Tell us @BritandCo!