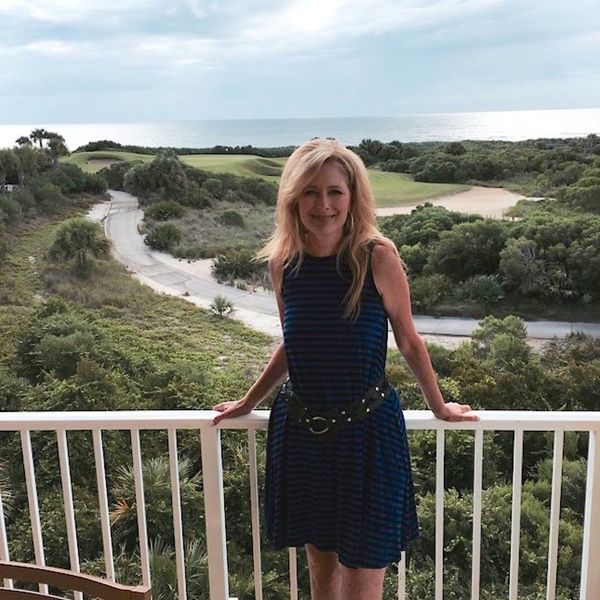 A lot of celebs seem like that haven’t grown a gray hair — unless it’s intentional, of course — in 20 years. We’re lookin’ at you, recent bday girls Madonna and J Lo. But we know that celebs have access to the best derm docs in the world, pricey laser treatments, fillers and expensive skincare regimens, so it’s no real surprise when it looks like they’re aging backwards. Recently, Jezebel wrote about a Tennessee-based beauty vlogger who happens to be the “mega-babe aunt” of the writer’s friend and it looks like your new, real-life inspo for #aginggoals.

Melissa, or MsMelissa55 as the web will get to know her, is 60-years-old, a mother of two and grandmother of seven. Wut? No, seriously. What? This is a screen shot from one of her videos. Is the fountain of youth coming out of her tap, because BRB we’re moving to Tennessee right now.

According to her video on skincare, she can “promise, swear on the Bible” that she has never used any fillers or injections of any kind. She even took a video to prove it. She’s also only had one facial in her life and it was in her 30s. Hilariously, she says, “I didn’t like it, so I never got one again. I kinda think maybe I don’t like people touching my face.” You’re not alone, Melissa, and you still look damn good.

So, what IS her skincare regimen? Melissa dishes that she most recently has fallen for products with Urea in it (yup, the stuff in pee) and she (brace yourselves) doesn’t believe in moisturizer. She has “a theory that moisturizers… can make your skin lazy and make it have less moisture because it doesn’t have to work for it.” Iiiiiinteresting hypothesis there, Melissa, but hey, it certainly seems like it’s working for you, so keep doing what you’re doing.

Check out her skincare video below:

Do you know anyone who is similarly ageless? Tell us in the comments below!

Kimberly Wang
Kimberly Wang writes about all things pop culture, tech, style, and beauty. She's a Bay Area transplant and has an MFA in Creative Writing from Columbia University. On a sunny New York day, you can find her hanging out with her mini schnauzer Isabelle Jellybean on a blanket in Central Park.
YouTube
Health
YouTube
More From Health