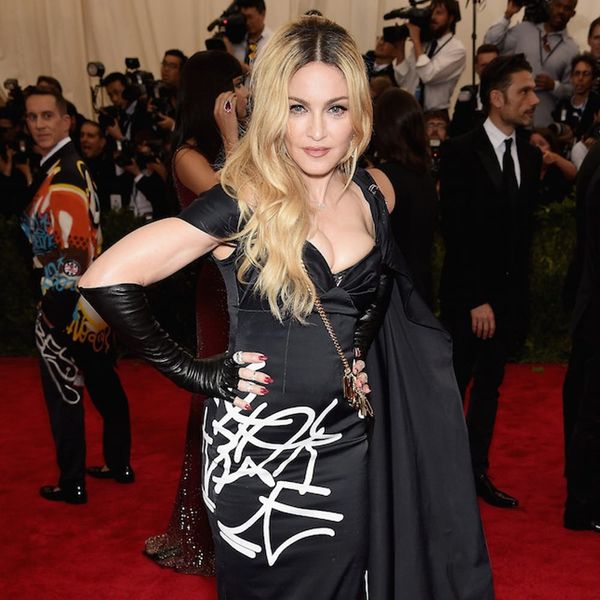 Yesterday, the reigning queen of pop (sorry not sorry, everyone else, Madonna will be queen forever), ushered in her 57th with a gypsy-themed birthday bash — and she looked positively radiant. The lady is not slowing down and the world is better for it. Back in February, she told Rolling Stone that for women in society “when they reach a certain age, have accepted that they’re not allowed to behave a certain way. But I don’t follow the rules. I never did, and I’m not going to start.” Amen, sister! She wouldn’t be Madonna if she didn’t break the rules after all.

The singer posted this adorable pic of herself with 18-year-old daughter Lourdes from last night with the caption: “Birthday Fun with Princess #1” Lourdes Leon is rockin’ super trendy gray locks and decked out in cuff bracelets, a bib necklace and big hoop earrings — the statement here is definitely maximalist. As for the Rebel Hearts singer, looks like she could be Lourdes’ sister with her boho rose crown, flowing blonde waves and lacy black dress.

Plus, with the goofy smiles and looks on their faces, you can tell the mother + daughter duo are having a total blast. They’re both queens IMHO.

But twinning with her daughter isn’t the only thing that happened. The popstar got the sweetest and fuzziest gift for her birthday. She posted this sweet pic of herself with her new puppy, who she named Gypsy Rosa Lee (love the name) and dubbed the “best birthday present ever!”

What do you think of Madonna’s pic with her daughter? Tell us in the comments below!

Kimberly Wang
Kimberly Wang writes about all things pop culture, tech, style, and beauty. She's a Bay Area transplant and has an MFA in Creative Writing from Columbia University. On a sunny New York day, you can find her hanging out with her mini schnauzer Isabelle Jellybean on a blanket in Central Park.
Parenting