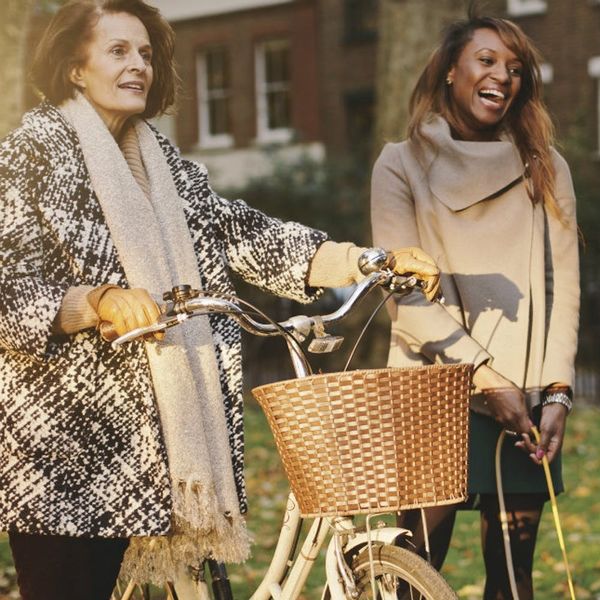 We’ve helped you deal when you’re SUPER mad at coworkers, crazy mad at your siblings and boiling mad at your parents… now it’s time to tackle one of the greatest rage-inducing challenges of all: your in-laws. They say when you marry someone, you marry their whole family. And often, that’s where most of the whole “for better or for worse” thing comes in. There might be times when your in-laws make you feel like you’ve always been part of the family (right down to how they nitpick everything you do), and other times when you feel like you’re being totally frozen out. But no matter how they do it, when your mother- or father-in-law makes you super angry, you still have to stop yourself from blowing up at them. Here are five tips on how to keep the peace — for the sake of your relationships with you boo’s family and, more importantly, your better half.

1. Know when you need to say something. When you have an issue with an in-law, you’re probably way more hesitant to confront them than you would be if you were dealing with your own parent (because that “Ugh, Moooooom!” habit dies hard). But that doesn’t mean your in-laws don’t have the same talents for getting under your skin. If you’re feeling disrespected or having borderline panic attacks before every visit (not just dealing with little annoyances), you’ve got to stick up for yourself and nicely let them know you don’t appreciate them judging you, criticizing you, disrespecting your household rules or just throwing mad shade. Even if it doesn’t do much to change your in law’s behavior at first, you’ve taken the important first step of making them aware of your feelings.

2. Don’t make your S.O. choose sides, but get support. It’s important for your spouse to back you up on this, and potentially even lead the conversation. That doesn’t mean giving them ultimatums about how they interact with their parents and manage their relationships, but they should make a point of letting their parents know that they find how you’re being treated unacceptable, and that it hurts them too. It might take hearing it from their own kid for your in-laws to really get what’s bothering you (and that it needs to stop).

3. Remember it’s not about you. Every family is different, and that’s not necessarily a bad thing. Your boo’s fam just happens to be different in a way that drives you nuts. If you have an in-law who’s constantly belittling you or trying to take you down, that behavior is probably coming from their own insecurities. It doesn’t make it okay, but it can help to know there’s an explanation. If your in-laws are constantly forcing you into debates on issues you know you won’t see eye-to-eye on (especially now — it is an election year), practice that age-old mantra: “Let’s agree to disagree.” Getting them to come around and understand your point of view might not be worth all the drama.

4. Set boundaries for contact and visits. If your S.O. isn’t willing to step up for you, or you’ve both tried everything you can and it just isn’t working, you might need to limit your interactions with your in-laws as best you can. If the issue is that they’re calling constantly or want to visit all the time, that means explaining that you really just don’t have the availability to see them every week, and being firm about a new schedule — and especially shutting down any unwanted, unexpected drop-in visits (eek… there are some surprises we really don’t like). If the issue is that when you do see them, they’re big fat jerks (although don’t call them that to their face), let your S.O. know you’re probably going to have a lot of “stuff to do” in the kitchen during their visit, or slip outside for a quick walk around the block if you feel your anger getting the best of you.

5. Remember all the things you like about your marriage. At the end of the day, your relationship with your partner is what matters most. As long as they’re being supportive and trying their best, try not to associate their parents’ bad behavior with them. And if your S.O. really gets it (AKA how annoying/demeaning their parents can be), you’ll both have some venting to look forward to after the in-laws (finally) leave.

Have you ever had a major fight with your in-laws? Tweet us your tips for keeping the peace @BritandCo.