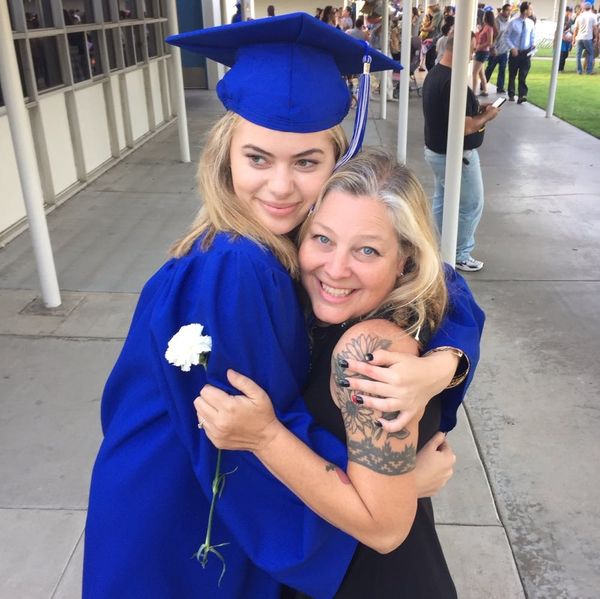 In honor of Mother’s Day, we’re sharing stories from the Brit + Co community about mother figures who shape our lives.

My husband and I began mentoring *Kaiya, a then-15-year-old girl in the Los Angeles County foster care system, five years ago. We met her through Kidsave, a non-profit dedicated to helping “often forgotten older kids living in orphanages and temporary foster homes” find adoptive families or caring, connected relationships with “at least one safe, stable adult.” Kaiya was on our team for one of the outdoor games the organization had hosted to introduce teens to adult volunteers; I had first assumed she was a volunteer staff member due to her height and poise. When it came time for lunch, she sat next to us and we bonded over a love for tofu tacos and music. She showed us her iPod, full of classics from The Andrews Sisters to ‘80s-era pop. The group determined us a match (at the end of the day, Kaiya noted us on an anonymous form and we did the same).

Over the months and years that followed, we got to know this open-hearted beautiful kid and believed in her limitless potential. Considering her interest in the arts and fashion, we visited museums, clothing designers, and art shows on the monthly weekends when she would stay in our home. We introduced her to our community of friends, and many pitched in to help nurture her dreams in their own ways. Over time we celebrated holidays together and worked with social workers trying to advocate for her needs through foster home moves and school changes. As we moved through the world together, there was much debate over what Kaiya should call us. Sometimes people thought she and I were sisters. One foster mother suggested using the term ‘godparents’ to describe our unique relationship to Kaiya, or to say we were an aunt and uncle, which none of us were comfortable with. Kaiya said she didn’t like the term ‘friends,’ either. The program called people like us ‘host families’ but after much discussion, we settled on ‘mentors.’

We were there for her high school graduation, sitting next to her biological father, sister, brother, nephew, and most recent foster mother. By then, we had watched Kaiya experience two failed adoptions—one single parent who backed out at the last minute, and one family whom Kaiya moved in with and then ran away from, into the arms of an abusive boyfriend. She left him and lived with other mentors temporarily until she met another guy; this one seemed stable, with a job, a few years older, and was living with his mother. She moved in with him almost immediately and just as I helped her register for college, she announced she was pregnant. It was not quite what I had hoped for her, but I knew that this was what she wanted.

Kaiya decided against continuing school and chose to become a mother instead—something I felt I couldn’t help her with and that I’d purposely never chosen for myself, knowing the enormous responsibility that came with the title. What were we to her now, anyway? My husband joked that we had become “grand-mentors.”

After attending her baby shower, I stepped back. I didn’t see Kaiya for a few months after the baby was born, and I rationalized this by saying she needed time to bond with her new family. The truth was, I felt disappointed by her decision of young motherhood and unqualified to assist with everything that came along with that. School, internships, career advice? Those were worlds I understood. Parenting? I am admittedly clueless. I left home at 17, was disowned for being in an interracial relationship, and have supported myself since. In my late teens, a therapist told me I needed to learn to parent myself, and at 48, sometimes I feel I’m still working on that. Kaiya was grown up now, I reasoned. She had her boyfriend’s family. I decided I could be supportive from afar.

Just as I was beginning to worry that we had failed as mentors and our work here was done, Kaiya started texting to ask how we were — something she’d never done before. She wanted to drop off a gift and was more interested in me opening it than receiving one in return. A wise friend and mother-of-two suggested that Kaiya and I meet for lunch, that maybe a “girls’ day out” away from the pressures of new motherhood would be a relief for her. When we met up, Kaiya vented about a disappointing attempt to contact her biological mother, troubles with her biological father, and the typical first-year spats she’d been having with her boyfriend. I shared some stories of rocky beginnings with my now-partner-of-23-years. She said she’d recently found a job and started working out at the gym again. She looked thin and a little tired, but she seemed happy.

I grew up in a two-parent family but I’ve been thinking a lot about the people who helped me when my parents otherwise couldn’t — the elderly woman across the street who read to us and kept an art drawer for the neighborhood kids to play with when my mother went back to work; the family I worked for as a live-in nanny in my early 20s who taught me how to drive a stick-shift and demonstrated unconditional love, treating me like one of their own; the older professor friend who helped me, a first-generation high school graduate and college student, with the daunting process of applying to graduate school.

Kaiya is 20 now and motherhood is part of her journey. Now we text almost every day and try to see one another every two weeks for a catch-up. I am no longer a mentor to a child, but a shoulder for a young adult to lean on, a witness to one young woman pursuing her own unique dreams and desires.

After many years of joking that she “can’t get rid of us,” I asked her recently what to call our relationship. She texted back the laughing-while-crying emoji face.

Shawna Kenney is an author, essayist,and journalist. She serves as a writing teacher with the UCLA Extension Writers’ Program and PEN in the Community resident.