Yup — You Can Now Adopt a Dog at IKEA 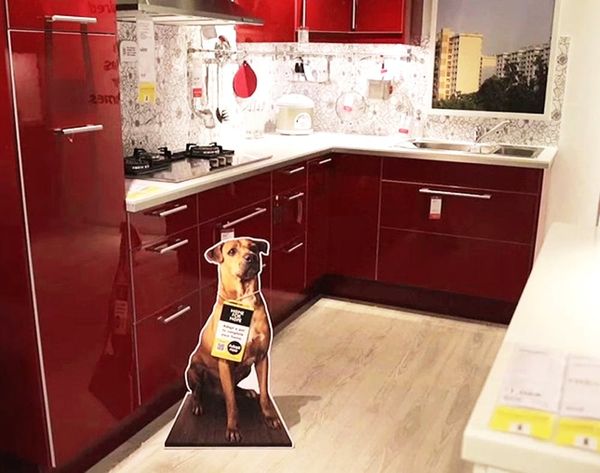 The next time you’re at IKEA, picking up a Lack side table or a Malm dresser, you can also pick a cute critter to sprawl out on your Stockholm rug. That’s right, you can now adopt pets at the Scandinavian home store.

Only available in one store in the U.S. (Tempe, AZ), you’ll find life-sized cardboard cutouts of dogs from the Arizona Humane Society who are looking for a home. And not just any home, but the home of someone who appreciates minimalist aesthetics.

The campaign started in Singapore as a partnership with a group called Home for Hope, and IKEA plans to expand to stores across the U.S. slowly, eventually reaching all of them. It’s all being done in an effort to raise awareness of animals who are in much need of forever homes.

How do you take the dog from cardboard cutout to the cuddly kind? When you see a Jack Russell or a Labradoodle that you just HAVE TO HAVE, whip our your phone and scan the QR code hanging from the dogs’ neck. You’ll go right to the little barker’s profile page on the shelter’s website.

So far, all the dogs featured have been adopted. Because apparently when you can carry a cardboard cutout of a dog around the store and put it next to your Billy bookcase, you realize that nothing completes a room like a wiener dog.

If you know you definitely don’t want a pet, we suggest leaving the kids at home. For those who go in armed with giant blue bags and the need for a furry friend on the spot, the Human Society’s mobile adoption center, Waggin’ Wheels, will be at the store on July 29 from 12-3 p.m. So expect to go home with more than sparkling apple juice that day.

Would you adopt a pet from Ikea? What do you think of this idea? Let us know in the comments below!

(h/t Mashable and The Dodo)

Lex Monson
Alexis is the co-founder of Punkpost, the app that lets you send handwritten cards (yes, handwritten by a real human) in the amount of time it takes you to send a text message. The exclusive card collections are created by a community of artists and designers and hand letter pressed on high-quality cotton paper. Get the full experience by downloading the app from the iTunes Store.
IKEA
Home News
IKEA