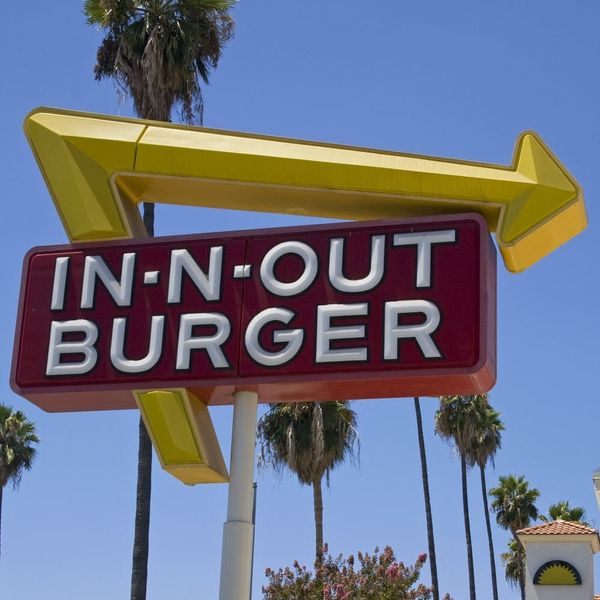 For the last 15 years, residents in the states of California, Arizona, Nevada, Oregon, Texas, and Utah (and guests at Katy Perry’s Golden Globes table), have collectively enjoyed In-N-Out’s simple-but-classic menu of burgers, fries, and shakes, the contents of which rarely — if ever — change. For 2018, however, the famous fast-food chain is switching things up in a big way with the addition of a brand new beverage that just might have some *extra* implications for the company.

According to the Inland Valley Daily Bulletin, the burger stop is now offering an 8oz. hot cocoa — the first of its kind — to customers for the low, low price of $1.60. Made with hot water instead of milk, the new drink also comes with mini marshmallows, which can requested on the side instead.

The outlet reports that it’s the chain’s first major menu change in more than 15 years, when it added lemonade.

Customers confirmed the appearance of the new treat, taking to social media to show off a brown and white cup decorated with palm trees and bearing the words, “Hot Cocoa.”

Randomly the first customer at the Monterey store to be offered an #innouthotcocoa with marshmallows. #noneforraul It was freezing cold and sounded better than a chocolate shake. @offthemenu831 ❤️🤣 @innout

It’s unclear if the hot cocoa was a response to current colder temps — a customer in Monterey, California, noted that it was “freezing cold” when she ordered one — or an indicator of things to come… like, say, an expansion of the chain to cold-weather areas?

In-N-Out did reveal plans to launch as many as 50 restaurants in Colorado back in November, though it’s estimated that the first ones won’t arrive for roughly three years.

Still… fingers crossed that this hot cocoa signals just the beginning of a nationwide takeover!

Do you think In-N-Out with broaden its reach in cold-weather cities? Share with us over @BritandCo.

(Photos via Citizens of the Planet/UIG/Getty)

Nicole Briese
Nicole is the weekend editor for Brit + Co who loves bringing you all the latest buzz. When she's not busy typing away into the wee hours, you can usually find her canoodling with her fur babies, rooting around in a bookstore, or rocking out at a concert of some sort (Guns N' Roses forever!). Check out all her latest musings and past work at nicolebjean.com.
Fast Food
Food News
Fast Food New Food Alert
The Conversation
More From Food News