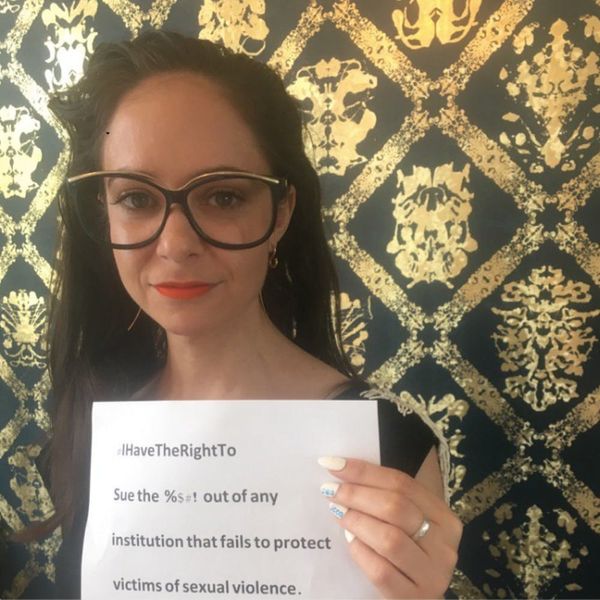 For anyone dealing with internet stalking, threats, or having intimate photos or videos shared without consent, Carrie Goldberg has emerged as the lawyer to call.

#IHaveTheRightTo
sue the %$#! Out of any institution that fails to protect victims of sexual violence. @PAVEinfo pic.twitter.com/OBUEzmsLHO

Goldberg thinks we need to understand and acknowledge the toll that NCP can take on a person’s life, without sex-shaming the victim for ending up in a vulnerable position. This approach has made her an approachable figure in the world of law, where many people feel intimidated to ask for help in such a private situation.

With her tailored suits, bright lipstick, and super-high heels, Goldberg cuts an imposing and glamorous figure in the courtroom. In the New Yorker in 2016, Margaret Talbot wrote that to many of her young women clients, Goldberg “comes off like a cool older sister who always has your back.” To that end, she also makes her work accessible to clients and potential clients who may feel out of their depth when it comes to complex legal issues and jargon. She constantly updates her Twitter with news and information about new internet privacy laws, cases, and policies, and regularly gives interviews to publications like Teen Vogue and Forbes.

“I want our clients to feel that even if a person has taken some control away from them, it doesn’t mean they’ve lost their own power,” Goldberg said in MM.LaFleur. “When clients come to us, they’re in the middle of what might be the worst experience of their lives, and it’s like a tornado around them. Many of them have never had to hire a lawyer before. We try to instill confidence in them by modeling it, and showing them that we’re part of a team.”

So when you have a gala in NYC and a talk at US congress 9 hours apart, u gotta choose ur outfit wisely. pic.twitter.com/Ajb06Rc0de

The teamwork element of Goldberg’s approach to law is crucial for so many people who feel alone in their struggles to deal with an internet privacy case. This is especially true for Goldberg’s younger clients, many of whom are teenagers.

Last year, Goldberg’s firm was involved in a case in the New York City public school system, in which three teenage victims of assault were suspended from school after the incidents. Goldberg told the New York Times that she believed there was a “pattern within the city’s Education Department of indifference to the needs of Black victims of sexual assault,” asking the Department of Education to open an investigation into administrative practices around sexual assault in schools.

In all her cases, Goldberg reiterates the importance of empowerment and self-respect for her clients, calling out bureaucratic institutions and individuals for victim-blaming. “Every single one of us is a moment away from meeting an individual that’s hellbent on our downfall and will stop at nothing to guarantee it,” Goldberg told Motherboard. “It’s not the victim’s fault.”

Have you ever been harassed by an ex-partner? How did you handle it? Talk to us @BritandCo.