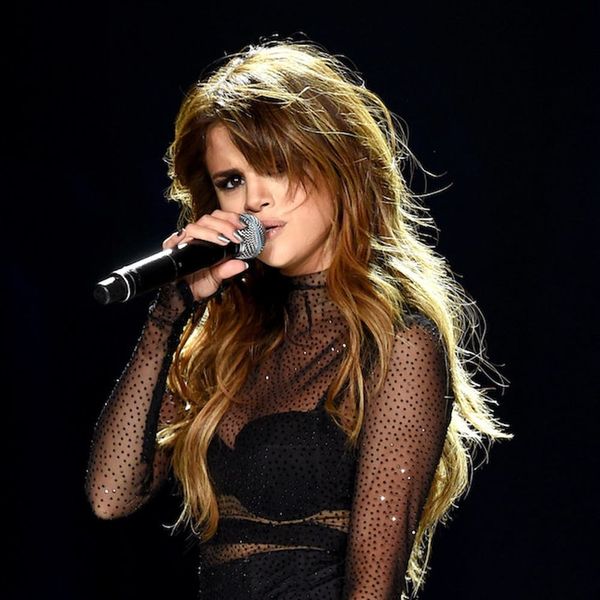 When you look back at some of the biggest celeb dramas of 2016, it’s kind of strange that Selena Gomez doesn’t immediately come to mind. After all, she went from staging an epic world tour to taking a big career hiatus and then a tear-jerking comeback, all within a year.

when your lyrics are on the bottle 😛 #ad

When 2016 started, Selena was riding high on the success of her newly released Revival album, including the smash hit “Hands to Myself,” which she took to the Saturday Night Live stage in January. Her Revival tour kicked off in the spring and took her around the world for four months as she killed it for crowds every night.

Then, in July, a day after her 24th birthday and after a massive show in Indonesia, she posted a cryptic Instagram that at first seemed like internal conflict over the Kimye and Taylor beef, but in hindsight was a clear indicator that she needed some time off.

“Tonight I felt extremely unauthentic, unconnected to both myself and my music,” she wrote in a since-deleted Instagram post. “I’ve never really felt like my materials, wardrobe or a video could define me. I act on a moment and fear something that hasn’t happened. I’m stagnant, I stay still and don’t just sit with myself first and ask, ‘Is this where I am, wholeheartedly?’ I’ve always told the truth. I’m always true to my word, I’ve shown who I am but I need to rethink some areas of my life creatively and personally. Had to get that out.”

Shortly after the cryptic message and after engaging in some social media drama with ex Justin Bieber and his then-GF Sofia Richie, Selena shocked fans by announcing that she’d be canceling the rest of her tour and taking an indefinite break to seek treatment for anxiety and depression, which she attributed to her previously diagnosed lupus.

Congrats, @selenagomez! 🎉 Here she is with a sweet message when accepting the #AMAs for Favorite Female Artist- Pop/Rock! pic.twitter.com/JCeE9IijDU

Four months went by without a peep as Selena recuperated. Then, in November, she made her return to the stage at the American Music Awards, winning the Favorite Female Artist trophy and delivering an inspiring acceptance speech. “I have to say thank you so much to my fans because you guys are so damn loyal and I don’t know what I did to deserve you,” she said, before reminding her fans that you can overcome struggles. “But if you are broken, you do not have to stay broken.”

Since then, Selena has remained relatively quiet, but it’s starting to appear as if a bigger comeback is in the works. In December, she was spotted on songwriter Justin Tranter’s IG (with a #goals-worthy new ‘do, natch) leading people to think they were in the studio working on music. She also ended the year with the distinction of being the most-followed person on Instagram, besting even her bestie, Taylor Swift.

Being able to create is my favorite thing in the whole world. I'm so excited to be a part of the vision and family @coach AND I get the honor to design with @stuartvevers -ahhhhhh

Then Selena was announced as the new face of Coach, definitely not the move of someone who’s looking to stay out of the public eye. Most recently, Selena has been linked to the Weeknd (and some inevitable potential drama with his ex, Bella Hadid). Neither has confirmed if they’re dating, but we can’t help but root for this pop-star power couple, even if — actually, especially if — they end up working on music together.

And speaking of music, Selena’s increased Instagram activity the past couple of weeks lead us to believe that something is most definitely in the works. From a return to live photos to clips of her singing along with friends in studio, it’s only a matter of time before Selena makes a massive comeback and takes the music world by storm.

Do you think Selena will have a big 2017? Let us know over @BritandCo!