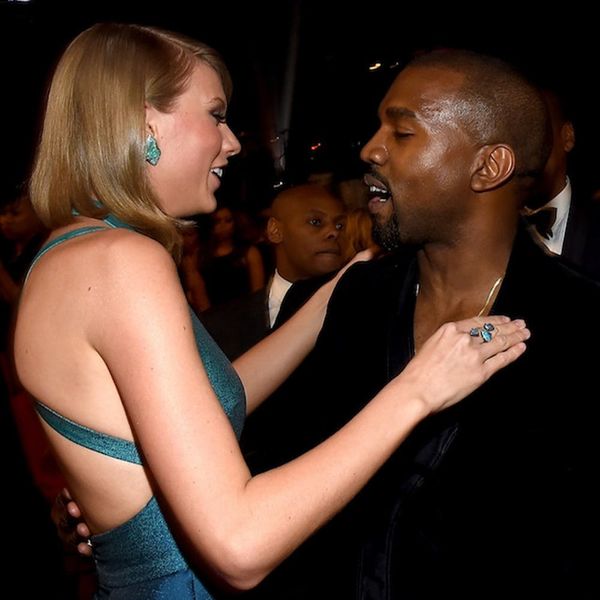 As much as you might try to avoid drama in your real life, when it comes to spats in Hollywood, it’s hard to look away sometimes. This year proved to be an epic one for celebrity beefs, and while not every single clash of personalities is worth remembering, we think, looking back, these spats will prove to be big stories in the year’s timeline.

1. Kanye West and Taylor Swift: When Kanye released The Life of Pablo in January, the lyrics to “Famous” set off what felt like an entire year of drama between the two camps. “I feel like me and Taylor might still have sex,” Kanye rapped. “I made that b***h famous.” Taylor’s squad immediately came to her defense, though Taylor kept pretty quiet until using her Grammys acceptance speech a few weeks later as a giant subtweet to Kanye. Kanye maintained that Taylor had given him her blessing to use the lyric, but in the meantime, people stood behind Taylor. (Photo via Larry Busacca/Getty)

2. Rob Kardashian and the Rest of the Kardashians: Rob’s new relationship with Blac Chyna — his half-sister Kylie Jenner’s boyfriend’s ex-gf and mother of his kid — was not exactly met with enthusiasm in the early parts of 2016, with Khloe even kicking Rob out of her house. The family tensions ebbed and flowed all year and continue to rage on, of course, but now with baby Dream in the picture, we hope things settle in this family.

taylor deleted these iconic pics that will forever live in my heart pic.twitter.com/smEFgPPmf7

3. Calvin Harris and Taylor Swift: After Tay and Calvin broke up and she immediately started dating Tom Hiddleston, the two played out their drama in modern public fashion, deleting old pictures and unfollowing each other on social media. It came to a ahem, dramatic head when Calvin went OFF on Tay on Twitter when she claimed songwriting credit on his new hit. Eventually things calmed down, and Calvin even sounded remorseful and mature over the situation in an interview with GQ. Phew.

Here is the entire conversation Taylor & Kanye had, judge for yourself. pic.twitter.com/InTjvPGKe3

4. Kim Kardashain and Taylor Swift: The ultimate in celeb feuds this year. In July, Kim Kardashian Snapchatted video footage of Kanye having a phone convo with Taylor in which she gives him the okay to use the lyrics in “Famous.” The internet. Lost. Its mind. Of course, Kim’s squad took her side while Taylor’s squad took hers (and some were confusingly neutral). Taylor more or less retreated from the public eye, asking to be “excluded from the narrative” and quietly continuing her relationship with Tom Hiddleston (which might have been staged to distract from the Kimye drama). In the end, Kim’s star rose, while Tay’s fizzled.

@KimKardashian I truly hope you realize how important setting goals are for young women, teaching them we have so much more to offer than-

5. Chloë Grace Moretz and the Kardashians: When Kim Kardashian broke the internet with her tastefully censored nude mirror selfie in the spring, Chloe Grace Moretz felt it was her duty to police how Kim uses her body, tweeting that women should teach young girls that they have more uses for the world than just their bodies. Kim and Khloe dragged Chloë. The whole thing was ugly but ultimately fizzled out.

6. Justin Bieber and Selena Gomez: The #JustinDeactivatedParty was one of the Twitter events of the summer, with fans celebrating when Justin Bieber removed his Instagram account. The reason? His ex-gf Selena Gomez. When Justin was posting tons of pics of his new then-gf, 17-year-old Sofia Richie, fans were being ULTRA mean. Justin threatened to delete his account. Selena posted, then deleted, a comment telling Justin that if he couldn’t take the heat, he should stop posting pictures of his gf. Ouch! He did just that. The effects of this one are still being felt, as Justin has actually never reactivated his account. (Photo via Pascal Le Segretain/Getty)

7. Angelina Jolie and Brad Pitt: Hollywood’s golden couple caused shockwaves when they announced their divorce a few months ago, and if that wasn’t enough, it got ugly, fast. In her filing, Angelina cited irreconcilable differences, but details about concerns over Brad’s drug and alcohol use around the children and an investigation into child abuse quickly came to light (Pitt was eventually cleared of the charges). While both have spoken about it only in official statements, we’re sure it’s some tense times — recently, Angelina was making what seemed to be pretty calculated legal moves to keep the whole thing very public. (Photo via Jonathan Leibson/Getty)

What celeb beefs did you follow in 2016? No judgement! Let us know @BritandCo.