“It Was ‘Handmaid’s Tale’ Type Stuff:” Interview With an Irish Abortion Rights Activist 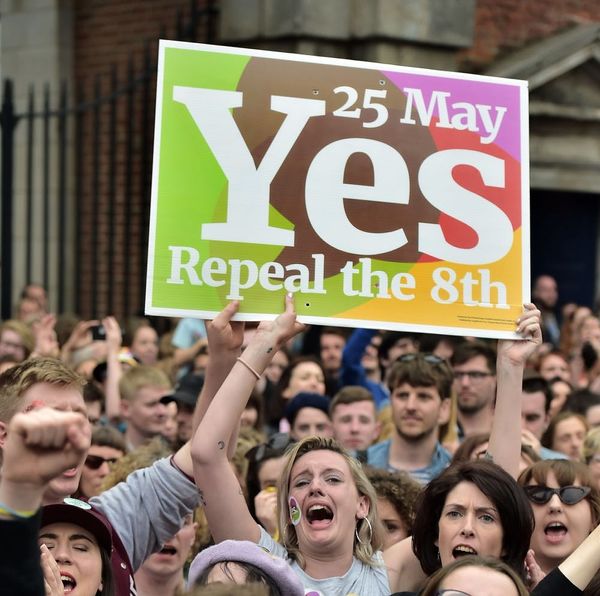 In a landslide vote of 66.4 percent, Ireland voted Friday in a historic referendum to repeal the Eighth Amendment to the Irish Constitution, which had outlawed almost all abortions as well as other lifesaving medical procedures for pregnant women if they were thought to endanger fetal health. Irish citizens from around the world flew #hometovote to repeal the amendment, and the referendum’s outcome has been celebrated worldwide.

The referendum to repeal the Eighth Amendment was galvanized in part by the 2012 death of 31-year-old Irish doctor Savita Halappanavar, who died of septic shock after she was denied an abortion during a prolonged and life-endangering miscarriage. But the fight to grant Irish women access to safe and legal medical abortions long precedes Dr. Halappanavar’s untimely death.

A majority of the activists on the front lines of the movement to repeal the Eighth have been scrappy young women who have risked their reputations, their livelihoods — and even their lives — to demand a better future for their fellow women of Ireland. One such activist is Stephanie Lord, the Convenor of the Drogheda Abortion Rights Campaign, who has spent the past two decades working toward this weekend’s victorious outcome. We spoke with Lord about the reality of living in an abortion-free Ireland, what it took to mobilize voters toward this historic decision, and what activists like herself will do now that their victory has been achieved.

STEPHANIE LORD: I’m ecstatic. This has consumed the whole of my adult life so it’s a big deal.

Did you predict such a landslide?

Not really. It was almost like we were too afraid to make any predictions given what we were up against. The [anti-abortion] side had so much money being funneled to them, spreading lies and misinformation, whereas we were grassroots, making badges in our bedrooms, knocking on doors one by one.

American readers may not know very much about the political reality of this issue in Ireland. Where was the anti-abortion side getting the bulk of their money, the Catholic Church?

Not the Catholic Church. US pro-life groups and US-based churches. Even though there are strict rules about what you can and can’t donate — you can’t donate from outside the state – compliance is poor on their side. So they were taking out billboards and advertising and we were thinking “how are we going to fund another 2000 leaflets?”

What do you think accounted for the overwhelming vote to repeal? A younger, more secular generation?

I think there were a lot of factors in it. For sure a younger population that was more aware of what was happening — it’s nearly impossible for [young people in Ireland] to not know someone who has had an abortion, either [one they traveled outside the country to obtain] or illegally with pills. Savita’s death was a factor. Ireland just changing overall in general. Less of a religious influence was a factor, but even people who were religious voted “yes” to repeal. They realized that women were dying because of this law.

For example, if you were mid-chemotherapy and became pregnant, your chemo was stopped. No chemo, no abortion. These cases happened. It was grotesque.

The PP v. HSE case of the woman on life support who was brain dead but kept alive artificially because of a fetal heartbeat impacted. Also, the Ms. Y case of a pregnant refugee who had a forced C-section had an impact. It was Handmaid’s Tale type stuff. That’s not an exaggeration

Also, the reality of the abortion pills and the danger of a 14-year jail sentence if you’re caught. People realize how unfair that is.

Why did it take this long to repeal?

It took so long because the political establishment was terrified of a vocal and well funded anti-abortion minority, essentially. Polling data showed for a long time that people supported reform but members of successive governments didn’t have the nerve to go near it. Another factor was a large distrust of women and their ability to make decisions. This is the same country that locked unmarried mothers up in Magdalene Laundries and the last one of them only closed in the early ’90s.

Groups advocating on the issue were small, grassroots, operating with no office space and no supports. It was hard to be taken seriously when opposing establishment groups had no shortage of cash.

Even a lot of the NGOs who played lead roles in the referendum campaign didn’t play an active part in the campaign when we were doing it 10 years ago. After Savita Halappanaver died, people thought it was okay to admit you were pro-choice out loud. The large non-profits came after women were organically organizing demos in the streets and it became a politically “safe” issue to support

Church influence certainly had an influence in the ’80s and ’90s but that wasn’t the main issue as of the early 2000s. At that stage, it was just political spinelessness

So basically, there was a political culture of fear that prevented anyone in office from even going near abortion, despite the documented change in public opinion.

Yes, exactly. I know of cases where anti-choice groups literally threatened TDs (members of Irish Parliament) and said they would print billboards in their constituencies saying they supported the murder of babies if they didn’t sign pro-life pledges. We used to get hate mail, death threats and rosary beads sent to us in the post.

And those groups were able to maintain their influence because they were flush with American cash donations?

Yes, lots of cash from the US. The money is hard to trace because there’s no enforcement but we know it’s coming from there. They aren’t raising money through grassroots crowdfunders and a thousand tiny pub quizzes like us.

They planned to spend huge amounts in social media ads and then Google and Facebook changed the rules and the anti-choice groups went into meltdown.

What has been your personal path as an activist working on this? How did you get involved and what were your strategies over the years?

I started in the early 2000s as a teenager. I became heavily involved in Choice Ireland in 2007 — at the time, our strategies were mainly about being visible and trying to give out abortion information, which was and still is, technically, illegal. At the time, emergency contraception (Plan B) was only available with a doctor’s prescription, so a huge amount of our time was spent running a campaign to change that and make it easier to access.

We were also campaigning to have crisis pregnancy counseling regulated, as fake anti-choice “clinics” were a major problem. At the time we always called for abortion laws to be changed, but given the problems accessing contraception, it seemed a very long way off. We stuck at the protests and creating awareness around what pregnant people in crisis were facing, though, and eventually, it started to pay off and people began to pay attention.

The media were interested in “hard cases” so they would raise the matter, but it was hard to keep it on the political agenda. The public were far more interested in this than politicians were.

So what happens now?

Myself and another activist are going to relaunch Choice Ireland as an abortion access fund once the necessary legal changes are made. We started working on it the morning after we won the referendum. No point in having a legal change if people can’t afford to access it! So, personally, my focus is likely going to be on that element of service provision, as well as standing in solidarity with people in Northern Ireland who still have an even more restrictive [anti-abortion] law that carries a potential life sentence in jail for procuring your own miscarriage.

WTF is up with the Northern Ireland situation, anyway?

So the north of Ireland is legally part of the UK but UK abortion legislation doesn’t extend to it, so they are still governed by a law from the 1870s.

Abortion is a devolved matter for the Northern Irish executive (government) to decide, but the executive collapsed some time ago so there is no progress. That said, they are in a different political space because they are more recently post-conflict than we are and their politicians are largely even more conservative than our own were. I think it will change because of the fact that we will have abortion in the south, so northern women will be able to access it here, but they need to be able to have abortions within their own communities too. It isn’t good enough to leave women desperate enough to take safe but illegal abortion pills on their own without the ability to check things with their doctors. They can’t access proper healthcare because the state is actively prosecuting people in the north for getting the pills.

There are networks of women in Ireland, north and south, ordering pills to their homes to get them in the country for other women — all risking jail for strangers, for pregnant people they never met. It is a shocking set-up. The state may be awful, but people are fundamentally very decent. We saw that again with our vote on Friday.