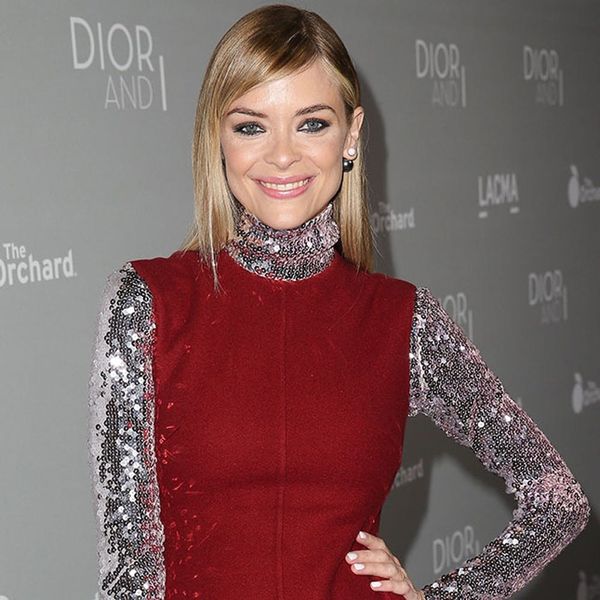 You guys, we’re getting *so close* to meeting Taylor Swift’s godchild! But before we’re gifted with the sure-to-be adorable images of Jaime King’s newborn (seriously, how adorable was her baby announcement?!) we’ve gotta be patient and take what we can get from the soon-to-be mother of two. Luckily for us, she’s been sharing a lot — TY, Jaime. Her latest #proudpregnancy moment comes courtesy of a venture with A Pea in the Pod.

The actress-designer-model is the new face of the maternity clothing brand’s Fall 2015 campaign, which also features the launch of her line Luxe Essentials Denim. Jaime told People that the denim collection features options like Jess named after Jessica Alba and Kim after Kim Kardashian, because the line is “designed after different friends that are mothers that [she] admires.” Umm, we <3 that idea so much!

While claiming her title as the newest A Pea in the Pod brand ambassador, the mother of James Knight and wife to Kyle also provided a little insight on baby no. 2 (due in August) to People. Check out the two most exciting revelations below.

How She’s Easing the Second Child Transition: She shared with the publication that she wants her 20-month-old to not feel isolated at all by having another little one in the household and wants the transition to feel natural. “For me, it was really important to create a nursery which felt like we could want to be in there as adults and James Knight would have a space in there. I didn’t want him to feel like that wasn’t his room as well.” She revealed how she’s making it a space her son will feel comfortable in when baby duties call. “We have this great little play table that’s for his age and a teepee for him and his little coloring books. We’re doing everything that we can to make sure that he knows that he’s always included in his little sibling’s life in every way, shape or form.” #MomoftheYear

Her Name Decision Process: She definitely wants to keep the naming tradition of using the first and middle names as a unit going, just like James Knight. As for what those names will be, that’s still being decided on. “I know the first part. We just have to decide on the second part.” She emphasized that the name will not be too crazy. “Names are never easy, you don’t want something to be too Hollywood and out there. I like classic and eclectic mixed together so it’s a bit of both of my worlds at the same time.” We cannot wait for this baby name!

Do you have any tips on making the transition from one child to two easier? Share them with us in the comments.