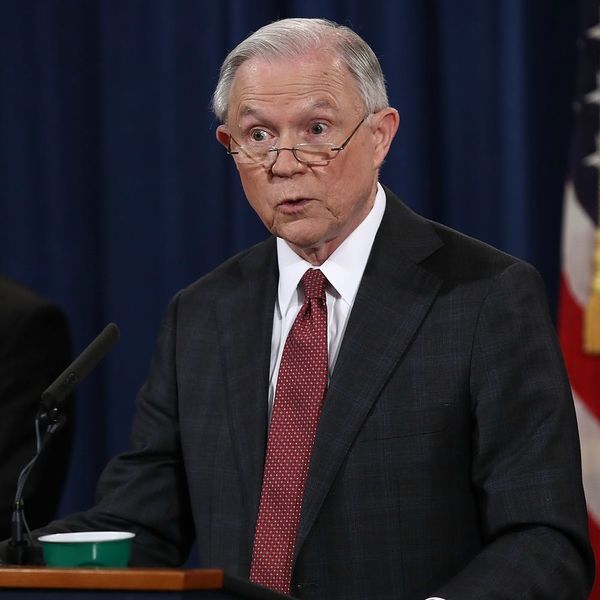 In an abrupt change of personnel, President Donald Trump asked for Attorney General Jeff Sessions to resign on Wednesday, ending the pair’s embattled working relationship after nearly two years. Sessions, 71, reportedly handed in a resignation letter to White House chief of staff John Kelly by midday, as per the president’s request.

Since he accepted his position in 2017, Sessions and President Trump have gone from allies to opponents, with Trump growing increasingly critical of Sessions’ work as head of the Department of Justice. Although Sessions supported some of the president’s more highly controversial policies, like the “zero tolerance” border policy which led to the detention and separation of thousands of children from their parents, increased power for ICE, and a continued program contracting private prison companies to detain immigrants, it appears Sessions’ inability to protect the president from the Russia probe may have caused a rift.

During Sessions’ confirmation hearings, the former Alabama senator told the committee that he had never met with Russians during the course of the 2016 presidential election campaign. Once confirmed, Sessions admitted to actually meeting with Russian operative Sergey Kislyak on two separate occasions, which forced him to recuse himself from the investigation into Russian involvement, paving the way for Mueller — a man the president has been openly hostile toward on social media — who formerly served as the head of the FBI.

The Mueller investigation has dogged the administration since early 2017, but investigators had recently been on a two-month hiatus leading up to Tuesday’s midterm elections. With the investigation set to resume Wednesday, Trump requested Sessions’ resignation.

Immediately after announcing the resignation, President Trump announced that the interim Attorney General will be Matthew Whitaker, a loyal Republican who, in an op-ed for CNN last year, wrote that he believed Mueller’s investigation, which he called a “witch hunt,” was going too far.

Reporter Daniel Dale pointed out on Twitter that Whitaker was hired by Sessions just one month after penning the op-ed for CNN. And according to The Washington Post, shortly before that, Whitaker mused live on air that Trump could fire Sessions and have an acting Attorney General step in only to remove the special investigation’s budget, making it impossible for Mueller to continue the Russia probe.

“So I could see a scenario where Jeff Sessions is replaced with a recess appointment,” Whitaker said, “and that attorney general doesn’t fire Bob Mueller, but he just reduces his budget to so low that his investigation grinds to almost a halt.”

While Whitaker has not stated he believes this is the most prudent or effective outcome of the Russia probe, the legal group Law Works first flagged the 2017 comments in mid-October of this year, when it was announced that Whitaker was tapped to become Sessions’ Chief of Staff.