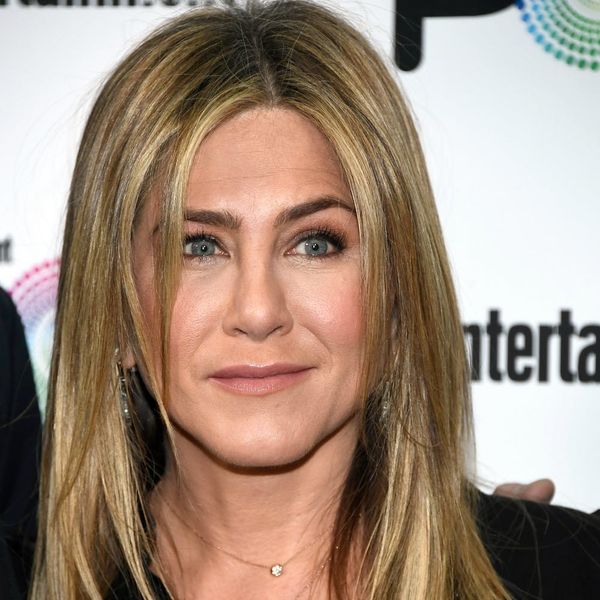 SNL has truly been killing it this year, and it’s a good thing: We don’t know what we would’ve done without the much-needed escape from post-election drama! Between Alec Baldwin as President-elect Donald Trump, Kate McKinnon as Hillary Clinton (while singing “Hallelujah,”) and Tom Hanks as David S. Pumpkins, the cast and guest stars have really been outdoing themselves.

Last night was no exception. Vanessa Bayer was in the midst of doing her now regular staccato-ed impression of Rachel Green from Friends (“Ooooh. Um. Um. Yeahhhhh. Oh, yeah, yeah, uh, uh”), complete with denim overalls and “The Rachel” ‘do, when who should show up but the real Rachel, Jennifer Aniston herself?

Yikes! We can’t imagine anything more nerve-wracking for an impressionist than to have their subject there, sitting right beside them as they poke their fun face-to-face. Vanessa handled it like a total pro, though, while Jen took the joke in stride.

“Friends was like, five million and five years ago, so we just gotta’ move on,”she told Vanessa.

She then nails an even better impression of her former character herself, squawking, “What? Me? Oh. Who? What? Oh.” as Vanessa chimes in in imitation.

Watch the hilarious clip in its entirety below!

Nicole Briese
Nicole is the weekend editor for Brit + Co who loves bringing you all the latest buzz. When she's not busy typing away into the wee hours, you can usually find her canoodling with her fur babies, rooting around in a bookstore, or rocking out at a concert of some sort (Guns N' Roses forever!). Check out all her latest musings and past work at nicolebjean.com.
Halloween
Celebrity News
Halloween
More From Celebrity News