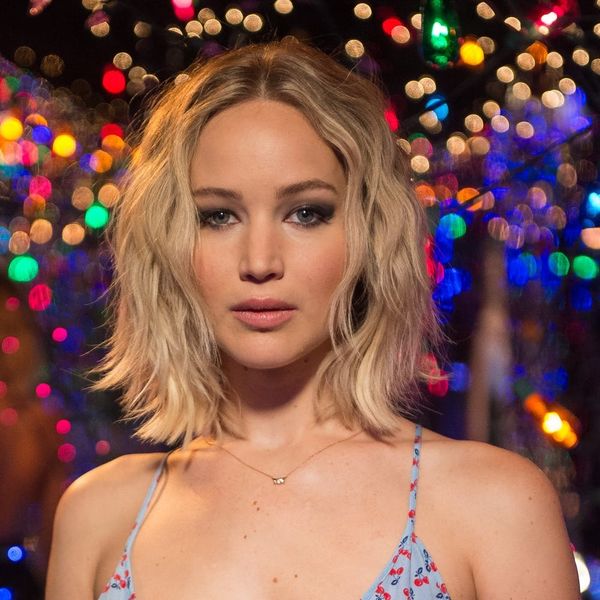 Rumors that Jennifer Lawrence may or may not be dating Darren Aronofsky have been buzzing for nearly a year. And while the two had previously refused to either confirm or deny their relationship, they appear to have had a change of heart. Opening up to Vogue for its epic 125th anniversary September issue, JLaw not only admitted that she’s smitten, but she also revealed what’s so very special about her “brilliant” boyfriend, the director of her upcoming (super creepy) movie, mother!.

The September issue has arrived! #AnnieLeibovitz photographed #JenniferLawrence for one of her four covers in honor of our 125th anniversary. See all four in the link in our bio, and pick up your copy of the magazine on @amazon. Photographed by Annie Leibovitz, styled by @tonnegood. #Vogue125

“I normally don’t like Harvard people, because they can’t go two minutes without mentioning that they went to Harvard,” the 26-year-old actress began. “He’s not like that.” She did admit, though, that he hates the fact that she watches reality TV. “He just finds it so vastly disappointing.”

We have to wonder how he reacted to the “Kardashian tent” the crew set up for Lawrence off set, where she could shake off the darkness that followed her after filming scenes for mother!. “It was a tent that had pictures of the Kardashians and Keeping Up With the Kardashians playing on a loop — and gumballs,” Lawrence said. “My happy place.” Sounds pretty great, TBH.

What also sounds great is the way in which the actress talks about her relationship with Aronofsky, who has a son from his previous relationship with Rachel Weisz. Despite the 22-year age gap between them (Aronofsky is 48), Lawrence said they “had energy.” Then she clarified: “I had energy for him. I don’t know how he felt about me.”

She speaks glowingly about his work. “When I saw [mother!], I was reminded all over again how brilliant he is. For the past year, I’ve been dealing with him as just a human,” she said. “I’ve been in relationships before where I am just confused. And I’m never confused with him.”

For our September issue, we commissioned artist John Currin to create a portrait of #JenniferLawrence for one of her four covers. Tap the link in our bio to see all four, and pick up your copy on @amazon. Cover by John Currin. "Untitled," 2017. Oil on canvas, 40 x 30 inches (101.6 x 76.2 cm). © John Currin. Photography by Rob McKeever. Courtesy @gagosiangallery. #Vogue125

Aronofsky has similar praise for Lawrence’s acting. “It’s such a raw, natural talent she has,” he told Vogue. “I always kind of compare her to Michael Jordan.”

We’ll be able to see the kind of spark they can create together when mother! hits theaters on September 15.