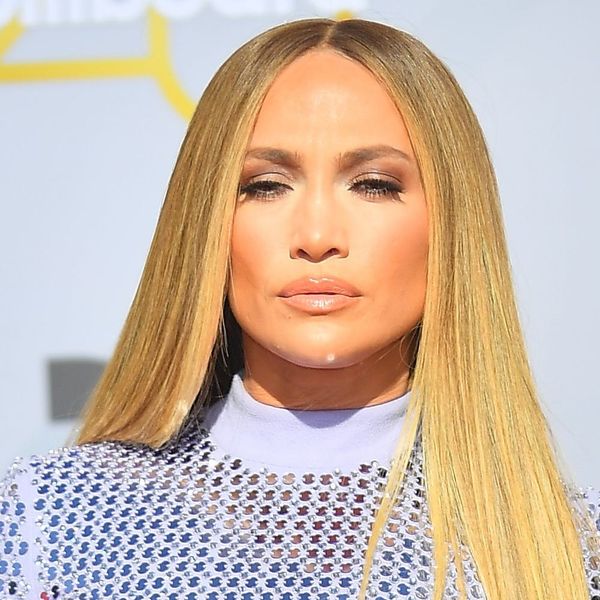 Jennifer Lopez is a diva through and through. While stars like Kendra Wilkinson, Iggy Azalea, and Kelly Clarkson were showing off new, shorter ‘dos over the weekend, the Second Act star was holding it down for long-haired ladies everywhere with what might have been the most extra hair extensions of all time.

The triple-threat debuted an uber-lengthy addition to her golden tresses that came down to her knee while appearing at the 2018 Billboard Latin Music Awards at the Mandalay Bay Events Center in Vegas.

For those of you doing the math, that’s slightly more than four FEET of faux hair.

It certainly made for a striking visual when the mother of two hit the stage to perform her new single, “El Anillo” in a sheer beaded bodysuit, bejeweled thong sandals and arm cuffs, and a golden headdress, her hair sweeping the stage behind her.

Tell @iamcardib and @djkhaled Khaled I’m on my way... gonna get this #DINERO 💵

Just days before, her locks, while undoubtedly still long, came down just to her décolletage.

There’s no word on how long she’ll be rocking the extra-long mane, but we can’t imagine it will stick around for any sort extended period: Imagine having to wash all those extra strands!

What did you think of J.Lo’s extra extensions? Share with us @BritandCo.

Nicole Briese
Nicole is the weekend editor for Brit + Co who loves bringing you all the latest buzz. When she's not busy typing away into the wee hours, you can usually find her canoodling with her fur babies, rooting around in a bookstore, or rocking out at a concert of some sort (Guns N' Roses forever!). Check out all her latest musings and past work at nicolebjean.com.
Awards Shows
Hair
Awards Shows Celebrities Celebrity Hair Hair Long Hair
More From Hair