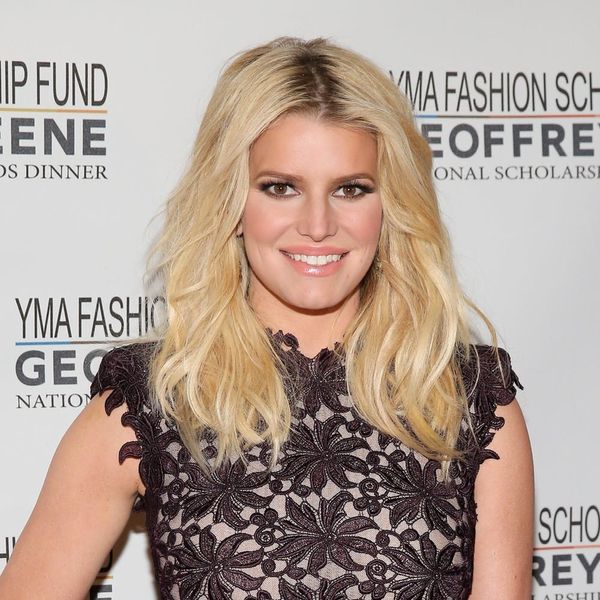 These days, it’s the Kardashians and the Real Housewives that captivate America with even their most mundane household activities, but back in 2003, it was Nick Lachey and Jessica Simpson, who gave us a glimpse into their married life with Newlyweds: Nick & Jessica.

While there were plenty of fun-filled moments to be had (like when Simpson thought Buffalo wings were made of actual buffalo, or when Lachey tried to bond with her dad), there was *one* moment in particular that no one can forget, even 14 years after the show’s demise (and 11 years after they filed for divorce).

The clip in question features Simpson dolled down while lounging on the couch with a bowl of tuna. “Is this chicken, what I have, or is this fish?” she asks. “I know it’s tuna, but it says chicken. By the sea,” she clarifies.

Lachey, dumbfounded, doesn’t answer right away, staring at his ex-wife as she begins to laugh. “Is that stupid?” she asks. Lachey is at a loss for words, looking away before glancing back at her once more and shaking his head. “You act like you’ve never had tuna before,” he says.

Though Simpson received plenty of flack for her mistake from not only her husband, but flabbergasted fans the world over, the 36-year-old is now having the last laugh after a bit of Whole Foods news seemed to validate her errant question.

It happens to the best of us @wholefoods

Taking to Instagram, she posted a hilarious headline from a Time magazine article, reading, “Whole Foods discovers its chicken salad accidentally has tuna.” You don’t say!

“It happens to the best of us, @wholefoods,” the businesswoman quipped.

What’s more, the chicken salad in question (all 440 pounds of it) was Buffalo-flavored (the irony!) and is being recalled from stores in New York, Connecticut, and New Jersey, as tuna is a known allergen for some.

It’s not the first time the fashion designer has been vindicated for her joke: Back in November, she also had support in the form of a tweet, which showed a photo of a chicken swimming along in the sea. “#ChickenoftheSea,” she joshed.

What was your favorite Newlyweds moment? Tell us over @BritandCo.