Justin Timberlake’s Superbowl Suit Is Stirring Up Some Mixed Feelings 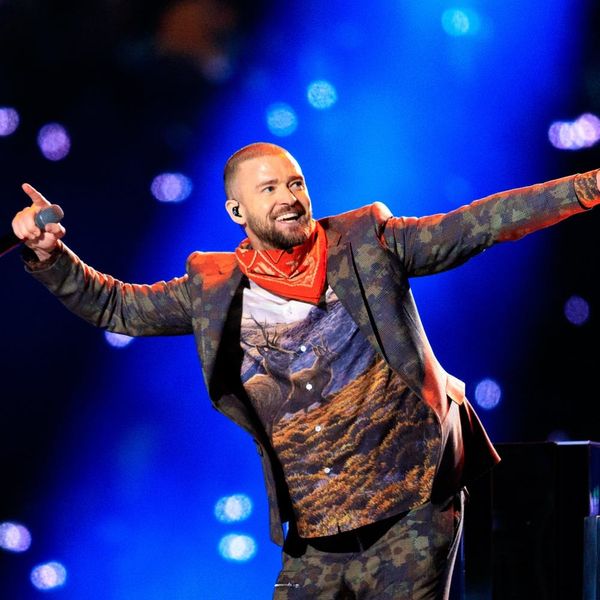 Justin Timberlake’s halftime performance at last night’s Superbowl gave us *so* much to talk about — from his medley of throwback hits to his stunning hi-tech Prince tribute to his #selfies with the crowd. But, regardless of the mixed feelings, we’d be remiss not to mention the 37-year-old’s outfit, which brought the aesthetic from his “Man of the Woods” video to life.

The usually dapper Suit and Tie singer opted for a more rustic look in a custom-made ensemble by designer Stella McCartney. “The pieces are inspired by [McCartney’s] upcoming Autumn Winter 2018 collection,” the label confirmed via Instagram.

The look was comprised of camo pants and a matching jacket, which the dad of one left unbuttoned to reveal a rather interesting shirt. The cotton top was emblazoned with a painting of two deer, transposed from a painting by British artist Martin Ridley, The Cut reports.

Twitter, of course, had some opinions on the performer’s sartorial choices. “The best Super Bowl ad is Justin Timberlake’s shirt advertising for the Bass Pro Shop,” one user joked.

Also how can you be worth 230 mil and wear a deer shirt pic.twitter.com/FKE4slJhMG

“Also how can you be worth 230 mil and wear a deer shirt,” another noted.

Justin Timberlake out here dressing like how he thinks Minnesotans dress with the elk print shirt, bandana, and dirty camo pants and jacket smh. 😒#SuperBowl

…while others just couldn’t help themselves from making hilarious comparisons.

Love it or hate it, this look (as well as JT’s performance…) is bound to go down in Superbowl history!

What did you think of Justin Timberlake’s Stella McCartney suit? Sound off @BritandCo!