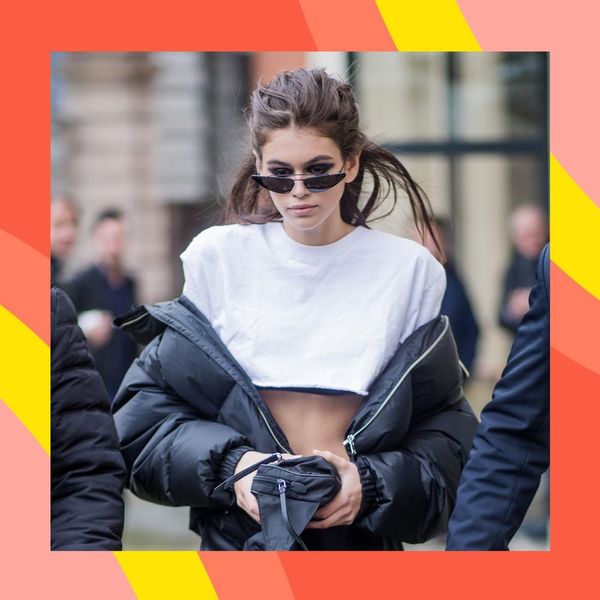 Kaia Gerber isn't even 17 yet and she's already slaying the style game harder than most celebs. Though she's following in mother Cindy Crawford's supermodel footsteps, Gerber is setting trends all on her own — and we're taking notes. Gerber's aesthetic is a perfect intersection of vintage cool, trendy comfort, and '90s-era edginess. Scroll on to check out Gerber's killer lewks she's rocked so far.
Fierce in Fur: This is precisely how to wear black with millennial pink — even if you're a Gen Z-er. Top this fuzzy getup with Gerber's signature military boots and you're ready to roll. (Photo via Raymond Hall/GC Images)
Baker's Dozen: What's not to love about this burgundy and cream combo, from the baker boy hat all the way down to the Freda Salvador mules? (Photo via Gilbert Carrasquillo/GC Images)
Plaid About You: Gerber left the Chanel show in Paris looking equal parts Clueless and Winona a la Reality Bites. (Photo via Pierre Suu/Getty)
Camo Print-cess: Whether or not she was aiming to blend in, Gerber stood out as she hit the NYC streets with a girlfriend, a cable sweater tuck, and stand-out camo crops. (Photo via James Devaney/WireImage)
Matrix-Inspired: Nothing says true early '90's fashion like oversized hoops, tiny sunglasses, a leather trench, and ripped jeans. Well played, Gerber. Well played. (Photo via Pierre Suu/GC Images)
Garden Party: This exotic twist on head-to-toe floral is a master class in giving a girlie print a grunge twist. Gerber's effortless blend of trendy blooms with a beanie and combat boots is nothing short of fabulous. (Photo via Gotham/GC Images)
All Black Everything: Black Dickies-style trousers *with* a chain is giving us some serious Nirvana vibes and reminds us of our days spent pouring over the Delia*s catalog. Just add some heeled boots, a printed blouse, and a little faux fur to update and pull this funky outfit together. (Photo via Jackson Lee/GC Images)
Oh, Crop: We'd never have thought to pair wide leg joggers with a mock neck crop and teeny tiny sunnies, but we're seriously considering adding this combo to our spring-time lineup. (Photo via Christian Vierig/Getty)
Casual Friday: Gerber truly takes laid-back fashion to the haute-est level possible. Pair oversized trousers with a go-to tee and larger-than-life jacket for a playful take on proportions. (Photo via Jacopo Raule/GC Images)
Sunday in New York: Tourist or not, we're loving this Big Apple souvenir beanie, over-the-shoulder fanny pack, and iconic Chuck Taylor's. Stars, they're just like us. (Photo via Pierre Suu/GC Images)