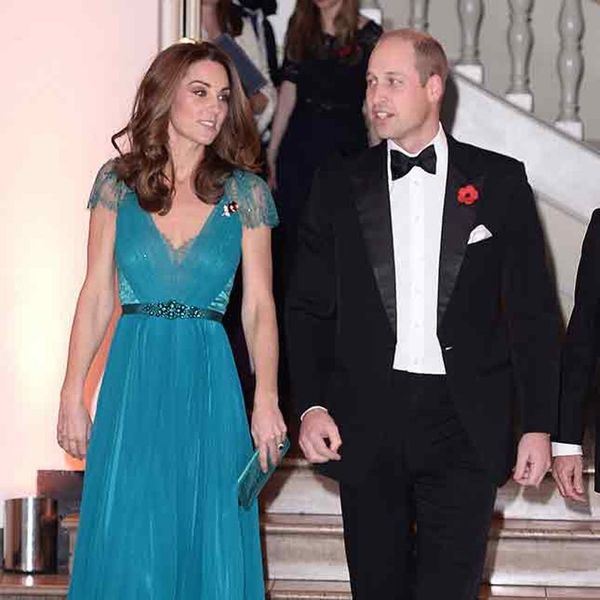 We basically perk up anytime Kate Middleton wears, well, anything. It doesn’t matter the occasion, she consistently steps out in elegant and fashion-forward silhouettes and the most elevated of basics. But most notably, she’s also not afraid to turn up in the same look twice. Remember her recycled Alexander McQueen coat dress she wore three times, including at Meghan Markle and Prince Harry’s Wedding?

Well, Duchess Kate just re-wore a teal gown by Jenny Packham (one of her favorite designers!) for the Tusk Conversation Awards in London where she was accompanied by her husband Prince William.

She originally wore the dress, which features sheer cap sleeves and an embellished belt, back in 2012 (below) for an Olympics gala concert at Royal Albert Hall in London. To take it one step further, she even donned similar accessories both times, including a teal clutch and coordinating platform sandals.

Naturally, she looked flawless at both formal events. Now, the question is, where will she wear this stunning gown next? Third time’s the charm, right?

What do you think of Kate Middleton’s gown? Let us know @BritandCo.

Bobby Schuessler
Bobby Schuessler is a contributing fashion writer at Brit + Co and has contributed to Who What Wear, Refinery29, Lucky, Glamour, Out, Nordstrom, and Barneys New York. When he's not writing about style and shopping, you can find him catching up on the latest Housewives franchise and sipping his go-to drink, a vodka martini with a splash of cranberry and a twist.
Celebrity Style
Celeb Style
Celebrity Style Dresses Kate Middleton Kate Middleton Style Royal Family
More From Celeb Style