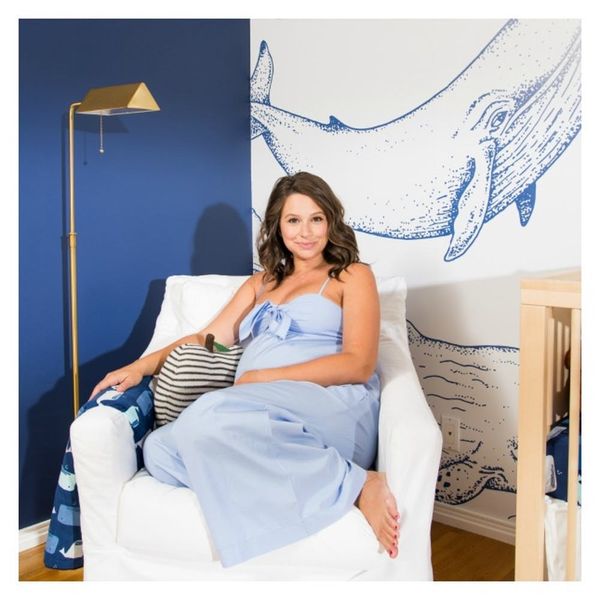 Being on the set of ABC’s Scandal doesn’t exactly allow much time for home decorating, as actress Katie Lowes, who plays Quinn Perkins on the hit TV show, found when she began planning for the birth of her first child. But after teaming up with James Tabb, a designer from Laurel and Wolf, she was able to create the nursery of her dreams — no small feat, considering Lowes and husband Adam Shapiro were starting from a completely blank slate in a brand new house. Scroll down for the cutest nursery pics ever, and then head to Laurel and Wolf for the full house tour.

The couple told the online-based design service that they wanted the nursery to not only be baby-friendly but also reflect their personal style. The result? With whale-themed accents scattered throughout, the room is “peaceful but also fun,” says Lowes, and totally hits the mark.

Tabb chose NYC-based shop Oeuf for sustainable, eco-friendly baby furniture. The crib doubles as a modern accent against the playful backdrop of an oversized whale mural.

The room’s tight color palette in blue, white, and gray keeps the space feeling cohesive, while the whale motif — found in the crib bedding, blanket, and lamp — reinforces the whimsical theme throughout.

With a dog and a new baby on the way, functionality was at the top of Lowes’ list of needs, not only in the nursery but throughout the house. “Basically, everything in here needs to look awesome but also be incredibly durable,” she says. Tabb managed to achieve this without sacrificing style. The home also boasts a formal living room and a semi-formal dining space, both of which feel distinctly grown-up and sophisticated.

Congrats to the first-time parents! We have to admit that we’re a bit jealous of baby boy Albee getting to live in such stylish accommodations.

Looking for more nursery room inspo? Follow us on Pinterest for lots of ideas and design solutions.

(Photos via Dustin Walker for Laurel and Wolf)

Emily Bihl
Emily Bihl is a freelance writer and sometimes-songwriter currently undoing a lifetime of healthy eating in the great city of New Orleans. When she’s not writing, she can be found covered in clay at the ceramics studio or attempting an approximated downward dog. She likes her black labrador Selkie, unexpected anagrams, and cracking the sugar on creme brûlée with the back of a spoon.
Celebrity Home
Home Decor Inspo
Celebrity Home Home Decor Home Makeover Interior Design Nursery
More From Home Decor Inspo