9 Apps to Help You Keep in Touch With Friends + Fam 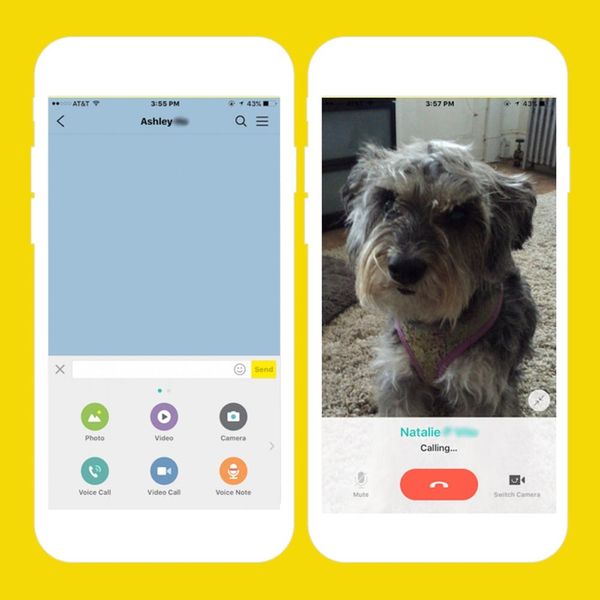 First day of college. These words probably still evoke an electric excitement in those of you whose diplomas are already sitting in a drawer collecting dust. For you lucky kids who have just gotten your orientation packets, get ready for one hell of a ride. You’re probably teeming with ideas on how to decorate your dorm room and researching which reminder apps you need to download to stay on top of schoolwork, and you’re likely going to be dealing with a little bit of homesickness.

1. Viber: This message/phone service allows you to keep in touch with any other Viber user and has the bonus feature of free calls! The app also has a Viber Out option, which allows you to call actual cellphones and landlines for a low rate. It also comes with cute stickers, like the teddy bear above.

2. WeChat: This app is huge in China and the Middle East. You can make voice and video calls straight from the app. And it has a social feed that lets you post and keep track of what your contacts are doing (or lets mom keep track of you). WeChat also has a Discover feature that allows you to chat with other users around the world. It’s sort of like a ’90s chat room, but we are diggin’ it.

3. Line: Stickers! Free voice and video calls! Games! This app is extremely popular in Asia, and is an excellent messaging app with all the trimmings. You can also do group chats with the whole family (and you have the option to mute it if it’s blowing up your phone in class).

4. WhatsApp: This app made some major headlines when it was bought out by Facebook for a whopping 22 billion dollars. It’s like the OG of messaging apps, with voice calling that first gained popularity in Asia. In the same vein as BBM, it allows you to see when your message was delivered and when someone has read it. So you’d better respond to mom; she knows you got her message.

DL It: Free for the first year on iOS and Android ($1/year after that)

5. Skype: If you don’t know (Skype), now you know. Skype was first released in 2003 — when you freshmen were merely toddlers — and has evolved greatly since. One of the earliest VoIP apps for private users, Skype now includes video calls, call forwarding (so you can have Skype calls directed to your phone) and Skype Out, which allows you to call handsets and landlines for a low rate.

6. KakaoTalk: KakaoTalk originated in Korea and is many Korean citizens’ messaging app of choice — and it’s easy to see why. With a good-looking and simple-to-use interface, it also comes with voice memos, video memos, video/voice chat and, of course, stickers. *Animated* stickers.

7. Hangouts: Sure, you know about hangouts for your computer, but did you know there’s also a handy dandy app for your phone? Keep up with your Gmail contacts straight from your smartphone. Plus, you can also call and video chat with them using the app. So have a family reunion by doing a group Hangout call.

8. GroupMe: This is the perfect app for those of you who have a tight-knit extended family. GroupMe was made for group chats rather than one-on-one messaging (though it has that option too). Send friends and family photos, videos and GroupMe’s unique set of emojis. Of course, if that chatting is disrupting your studying, you can mute or (sad face) leave the group.

9. ooVoo: This is another excellent VoIP messaging/voice/video app. ooVoo also has a super cool group calling option that allows you to simultaneously call up to twelve people. ooVoo prides itself on its super crisp video and audio, so you can hear everybody trying to talk at the same time.

Bonus!Couple: This one is for you high school sweethearts heading off to different schools. Couple pairs you with your S.O. and allows you to send each other doodles, notes and photos, and even stores important dates like your anniversary and birthdays. Their most aww-inducing feature is called the Thumbkiss. You or your partner will initiate a Thumbkiss session and when the other joins, you place your thumb on the screen. When your S.O. puts his/her thumb in the same place, the phone will vibrate and flash. Thumbkiss FTW.

Have you tried any of these apps? Tell us in the comments below!

Kimberly Wang
Kimberly Wang writes about all things pop culture, tech, style, and beauty. She's a Bay Area transplant and has an MFA in Creative Writing from Columbia University. On a sunny New York day, you can find her hanging out with her mini schnauzer Isabelle Jellybean on a blanket in Central Park.
Back to School
Tech
Back to School
More From Tech