Unicorn Cereal Is About to Take Over Our Cupboards and OMG 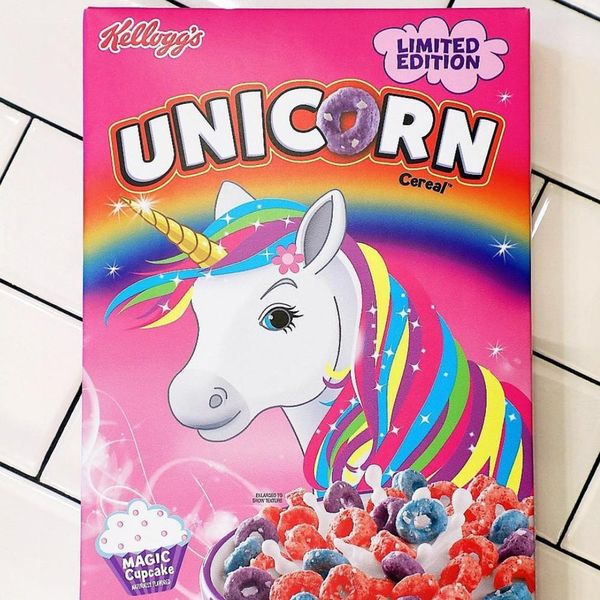 When people look back at 2017, in addition to “feminism” and “complicit,” one of the keywords we’ll remember most will probably be “unicorn.” It’s been the trend that just won’t quit (we can STILL taste that frappuccino!), and from the looks of things, Kellogg’s will be bringing it right on into the New Year with — wait for it — unicorn CEREAL!

Instagram account @candyhunting, a go-to account for the inside scoop on all things snack-related, gave us our first sneak peek at the new breakfast food, which shows a pink cereal box with a rainbow-maned unicorn.

As for the little cereal pieces, they look to be comprised of red, blue, and purple circles, not unlike the brand’s own Froot Loops. “New Kellogg’s Unicorn Cereal will hit shelves in March!” the caption wrote.

According to Food & Wine, Unicorn Cereal has already been around in the UK for a little while and will be available for consumption for a limited time in the US beginning in March 2018. If you want it before that, however, the outlet also reports that it’s been spotted at Kellogg’s NYC Café in Union Square, which opened last Thursday, though it’s not on the official menu.

As @candyhunting noted, the Unicorn cereal appears to be a mash-up of the European cereal of the same name and the limited-edition Birthday Cake Froot Loops out in Canada.

We, for one, cannot WAIT to give this magical cereal a try!

What do you think of Kellogg’s new cereal? Tell us @BritandCo!

Shea Lignitz
Shea can be found in the nearest bookstore or brewery, exploring the great outdoors, or blasting Led Zeppelin. She grew up in the cold and rain of Northern California's redwoods but is currently wandering around Texas.
unicorns
Food News
unicorns
The Conversation