The 2017 Dictionary.com Word of the Year Throws Major Shade at Ivanka Trump 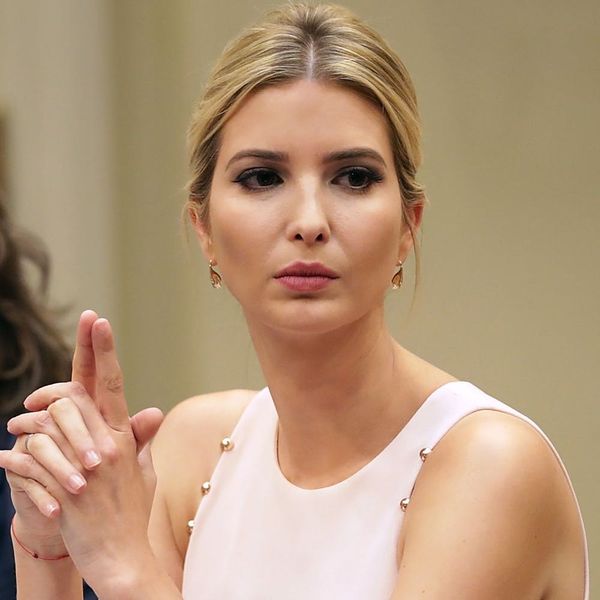 In the last few years, both Merriam-Webster Dictionary and Dictionary.com have had some pretty bleak words of the year. Last year’s Merriam-Webster entry (which is based solely on how many times a word was looked up) was “fascism,” while Dictionary.com’s word was “xenophobia.” While those words may have been a testament to what was happening in the collective minds of the people last year, Dictionary.com’s 2017 Word of the Year seems to be a bit of a direct dig at the first family, right down to their choice in how they announced the word: complicit.

We're so excited to announce that the Word of the Year is covfefe!

“We’re so excited to announce that the Word of the Year is covfefe!” the dictionary website tweeted, adding, “JUST KIDDING!” before announcing the word is “complicit.” In a blog post about the 2017 word of the year, the website explained the word’s meaning, and also why they chose it — mentioning the Trump family and, specifically, a satirical take on daughter Ivanka Trump that threw some serious shade.

“Complicit means “choosing to be involved in an illegal or questionable act, especially with others; having partnership or involvement in wrongdoing.” Or, put simply, it means being, at some level, responsible for something . . . even if indirectly,” the site explained.

But what does Ivanka Trump have to do with it? Dictionary.com says that after an SNL sketch earlier this year, in which Scarlett Johansson portrayed the first daughter in a faux commercial for a perfume called “Complicit,” there was a mega uptick in searches for the word. The sketch poked fun at the First Daughter’s advisory role in her father’s administration, though Trump later said in an interview that she didn’t know what it meant to be “complicit” in her father’s agenda.

“If being complicit is wanting to be a force for good and to make a positive impact, then I’m complicit,” Trump said, causing searches for the word to spike yet again.

Dictionary.com also used their blog post to remind readers of the kinds of political decisions that might implicate Ivanka Trump as “complicit:” the President’s use of social media to attack detractors; the dangerous ways climate change is being ignored; and the rising racial and socioeconomic tensions across the country. The site also called attention to Charlottesville’s brave anti-racist protesters and Colin Kaepernick among those who refused to be complicit in 2017.

“This year has seen a real awakening to complicity in various sectors of society, from politics to pop culture,” the post concludes. “Our choice for Word of the Year is as much about what is visible as it is about what is not. It’s a word that reminds us that even inaction is a type of action. The silent acceptance of wrongdoing is how we’ve gotten to this point. We must not let this continue to be the norm. If we do, then we are all complicit.”

What do you think about Dictionary.com’s Word of the Year? Tell us @BritandCo!