Merriam-Webster’s 2017 Word of the Year Is Totally Empowering 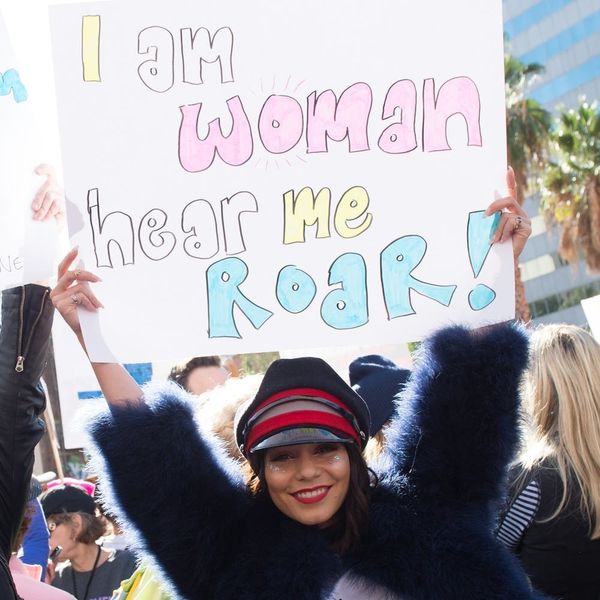 Merriam-Webster has tweeted a lot of different words that were relevant to the cultural and political climate of 2017 — remember the Kellyanne Conway shade? — but one word was more popular than all the rest. And it’s a good one.

The reference book company announced Tuesday that its “Word of the Year” for 2017 is “feminism.” Yep, feminism!

The site explained that feminism was the “top lookup throughout the year, with several spikes that corresponded to various news reports and events.”

Apparently, the word received renewed interest during the Women’s March in Washington, DC, in January, and then again when Conway said in an interview that she doesn’t consider herself a feminist “in a classic sense,” which caused many to ponder once again what the actual definition of feminism is.

The entertainment industry also inspired people to re-engage with the word, in large part due to the Wonder Woman phenomenon and The Handmaid’s Tale, as well as the recent wave of sexual assault and harassment allegations, including the #MeToo movement.

Merriam-Webster defines feminism as “the theory of the political, economic, and social equality of the sexes,” and also “organized activity on behalf of women’s rights and interests.”

With a sustained rise in lookups throughout 2017 and a number of event-driven spikes, ‘feminism’ is our #WordOfTheYear. Check the link in our bio for more of the year’s top words! . #language #dictionary #merriamwebster #feminism #feminist

Other words that made the list of top lookups show what else we were interested in throughout 2017.

According to Merriam-Webster, complicit was next in line after feminism, “driven primarily by politics — and Saturday Night Live. Complicit means ‘helping to commit a crime or do wrong in some way.'” It also happened to be Dictionary.com’s choice for Word of the Year (which many think was an attempt to throw shade at Ivanka Trump because of the SNL skit that showed the president’s daughter with a fictional perfume called “Complicit”).

Next on M-W’s list is recuse, which means “to disqualify (oneself) as judge in a particular case” and “to remove (oneself) from participation to avoid a conflict of interest.” M-W says interest in the word “spiked several times this year, and all the spikes were in reference to Attorney General Jeff Sessions” and his decision to recuse himself.

The fourth and fifth spots went to empathy and dotard, followed by syzygy (pronounced SIZ-uh-jee), which relates to the solar eclipse and is “the nearly straight-line configuration of three celestial bodies (such as the sun, moon, and earth during a solar or lunar eclipse) in a gravitational system.” Stellar!

Gyro was a topic of interest, too, especially after Luke Bryan popped up in a music video on The Tonight Show for his cheeky tune “I Don’t Know How to Pronounce Gyro.” (FYI, it has two main pronunciations: YEE-roh and ZHIHR-oh.)

After gyro, we have federalism, which people looked up thanks to what Merriam-Webster called “squabbling” over the fate of the Affordable Care Act; hurricane, which is self-explanatory; and gaffe, which spiked when the big Oscars Best Picture mistake went down.

Did you look up any of these words this year? Let us know @BritandCo!