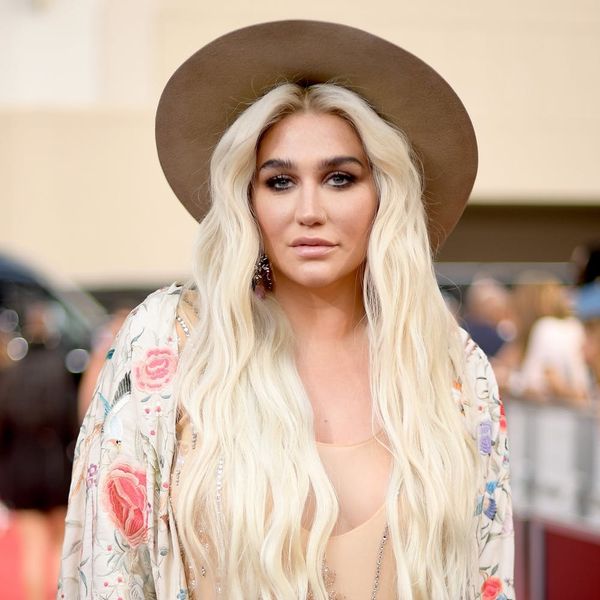 Kesha has been open with fans about what she’s endured both personally and professionally while caught up in a legal battle with her former producer Dr. Luke. Now she’s taking us even further behind the scenes with a new Apple Music documentary called Rainbow: The Film, which chronicles the making of her album of the same name. The documentary won’t debut until August 10 — the one-year anniversary of Rainbow‘s release — but Apple just dropped the first trailer online.

According to Billboard, Rainbow: The Film will include “psychedelic vignettes,” which represent Kesha’s struggles as well as her determination to overcome such a dark time. In the trailer, we see flashes of both dreamy and nightmarish scenes as Kesha’s voiceover explains, “Sometimes things feel like they’re too much to handle. You may be able to pull it together and put on a front in front of others, but inside you’re trapped, suffocating slowly.”

Later in the teaser, she says, “This record has quite literally saved my life.”

“Making Rainbow the album was such a therapeutic process, and given the opportunity to turn it into a three-dimensional piece of art has helped me find even deeper healing and catharsis,” Kesha told Billboard in a statement about the film, which will feature never-before-seen footage of her on tour.

“I hope this film inspires others to never give up even if you feel full of hurt or lost, because after the storm comes a rainbow,” the singer continued. “Depression, anxiety, and mental illness are things we all need to talk about more, and there is no shame in asking for help. Making the decision to work on yourself is the bravest thing you can do. I hope this film helps bring light and love to everyone.”

Will you be watching Kesha’s Rainbow: The Film Apple Music documentary? Let us know @BritandCo!

Desiree O
Desirée O is a ‘Professional Bohemian’ who loves anything and everything related to the arts, entertainment, and pop culture. She ADORES being a ‘Newsy’ for Brit + Co, covering all of the latest tidbits of awesomeness that you want to read about. When she’s not writing, she’s either making messy art, going on long adventurous walks with her camera, or poking around over at bohemianizm (http://www.bohemianizm.com/). You can find out about Desirée O and her work at http://DesireeO.com/ or follow her on Twitter @DesireeO.
Movies
Music
Movies Music
More From Music